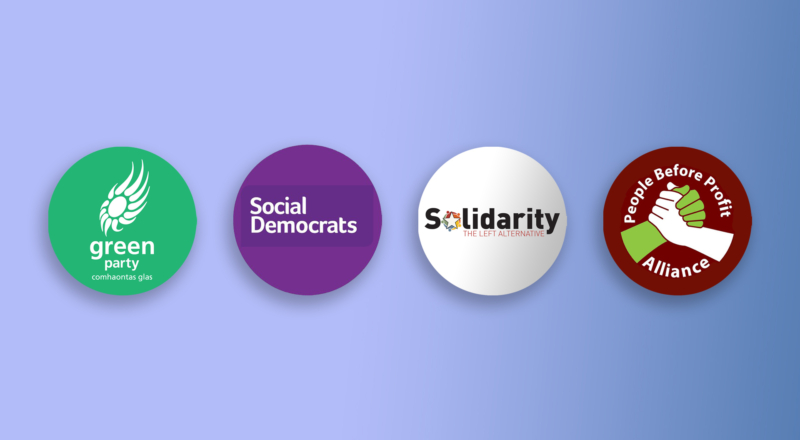 Smaller parties can have a big impact on how Irish governments are run, whether by putting pressure on bigger parties or by joining coalition governments. A coalition is formed when a larger party, such as Fianna Fáil or Fine Gael, joins up with one or a number of smaller parties or independents in order to make up the numbers to form a government with majority support. This gives these smaller parties a chance to influence policy and highlight their own agendas.

So when you go to vote in Ireland, it pays to know about as many parties as possible and to really consider which ones you’d most like to see with the power to make change.

The Green Party, Social Democrats and Solidarity-People Before Profit

The Green Party, the Social Democrats and Solidarity-People Before Profit (Solidarity-PBP) are three of the smaller political parties that stand for election in Ireland. All three support left-wing policies, but there are some important differences between them.

Although they are considered to be smaller parties within the Irish political system, each has the potential to grow if enough voters choose to support them.

Which party won the most seats in the Irish General Election 2020?

After the most recent General Election in 2020:

Of the three parties, the Green Party is the oldest. It was founded in 1981 as a party that aimed to protect the environment and create a fairer society. Issues such as climate change and the environment are at the core of their policies. The Greens gradually grew their support through the 80s and 90s, until eventually joining a coalition government with Fianna Fáil which lasted from 2007-2011. They saw a significant drop in support after leaving the coalition government in 2011, and have been working to build this support back up since.

Solidarity, which was formerly known as the Anti-Austerity Alliance, was founded in 2014 by members of another political party, the Socialist Party (SP). Although the SWP and SP sound similar, they are in fact different organisations. However, both are usually described as being on the far left of politics, favouring major change to promote equality and decrease the power of wealth in society. Solidarity-PBP have chosen not to have a party leader.

The Social Democrats are one of the newest parties in Irish politics. They were set up in 2015 by a group of Independent politicians to promote policies such as more spending on public services, a better health system, more equality within society, and tougher laws against corruption. The co-leaders of the Social Democrats, Róisín Shortall and Catherine Murphy, were both previously members of the Labour Party. A former leader of the party was Stephen Donnelly, who left the party to join Fianna Fáil.

Generally, all three parties agree on the need for a more equal spread of money and resources within society, a bigger role for the Government in tackling homelessness, higher taxes on the wealthy and better social supports for the poor. All three were also strong supporters of a Yes vote in the referendum to repeal the eighth amendment, which legalised abortion in Ireland.

The Greens and the Social Democrats

Politicians from the Green Party and Social Democrats worked closely together in the 2016-2020 Dáil as part of a ‘technical group’. By joining a technical group, smaller parties can increase their shared speaking time and have more of an influence over policy discussions between parties.

Solidarity and People Before Profit together form another technical group, and sometimes work with other small and left-wing groups to propose laws or oppose decisions by the Government.

However, relations between Solidarity-PBP and the Greens, in particular, have been frosty due to disagreements over the best way to combat climate change. The Green Party favours new taxes on carbon to discourage people from polluting, while Solidarity-PBP thinks this will unfairly impact on the least well-off in society.

What other political parties can I support in Ireland?

The Green Party, the Social Democrats and Solidarity-People Before Profit are just some of the many political options for Irish voters. Parties like Fine Gael, Fianna Fáil, Sinn Féin and the Labour Party all have their own policies and visions for Ireland’s future. It’s up to each individual voter to decide which (if any) of these political parties deserves their support.

Share this article -
Published May 23rd, 2019
Can this be improved? Contact editor@spunout.ie if you have any suggestions for this article.