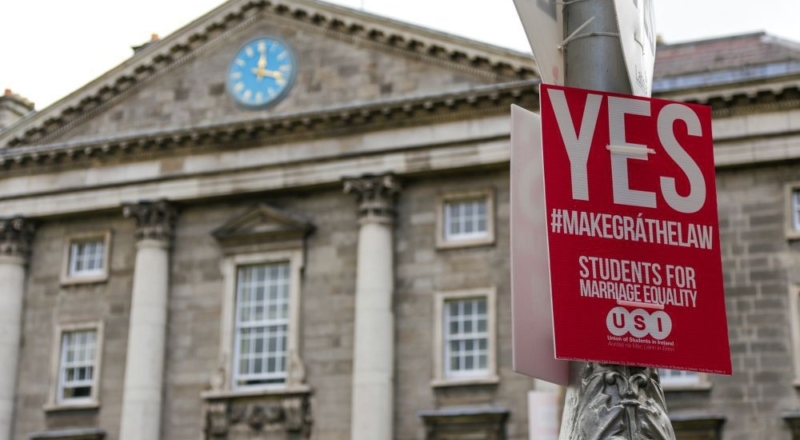 A plea for postal vote reform

Patrick writes about the thousands of votes being lost from abroad.

Written by Patrick McCusker and posted in opinion

"Given that we can’t all marry a diplomat or join the army so as to ensure that our voices are heard, perhaps it is time we reformed our postal voting system"

A recent survey from the Central Statistics Office indicated that upwards of 60,000 Irish people currently based abroad are eligible to vote in the upcoming same-sex marriage referendum. As it stands, emigrants retain their voting rights for a period of 18 months after leaving Ireland. However, this currently isn’t of much use to them. I’ve been cautioned about making sweeping and unfounded generalisations before, so I’ll be conservative in my estimate that only a small, if not miniscule, proportion of these people are amongst the diplomats and diplomats’ wives, Gardaí and members of the Defence Forces who’re eligible for a postal vote. For the rest of the Irish abroad, a flight home is required if they wish to vote. They could come home to a very different Ireland, for better or for worse, simply due to not being able to afford a plane ticket home from Australia.

Of course, emigration has been a fact of life for much of recent Irish history. The only thing to have truly changed down the years are the reasons cited by those leaving, with academic, romantic and professional commitments having joined the traditionally cited vocational motivation for going abroad. Many of those who leave have every intention of returning in the foreseeable future, and will be able to contribute skills and experience developed over the course of a year or two studying or working abroad which wouldn’t necessarily have been available to them in Ireland. In the meantime, decisions which directly affect them and their country can be made without their participation.

Such was my own experience studying abroad, as the 2011 presidential election and the referendum on the Fiscal Compact Treaty were held in my absence. I had every intention of returning to Ireland and voting there in the future, but for the time being I was relegated to the ranks of the non-voters due to being unable to travel to a primary school in Donegal on time. My situation was hardly a plight in comparison with that of many other Irish people abroad past and present (In all honesty, it barely registered as an annoyance at the time), but it did reveal to me the extent to which our state’s laws on postal voting are outdated and severe.

These are the same postal voting laws which enabled a political class with only a passing interest in the plight of those driven abroad by a lack of opportunity to be sustained by the votes of those fortunate enough to be able to live comfortably in Ireland. This was a status quo epitomised by Brian Lenihan Snr’s famous claim that “We can’t all live on this little island”, an attitude towards the less fortunate mirrored by recent comments that “There are people who will never work, who are allergic to work” by Michael Noonan. The complacency and indifference demonstrated by such statements is demonstrated in our postal voting laws, which restrict the voting rights of Irish citizens who have contributed both in the past and who will do so again in the future based purely on their ability to be physically present at a polling station. The anger and compassion which would have informed the voting choices made by many emigrants could have provided a genuine challenge to the political consensus in Ireland down the years, making it much harder for our political classes to survive by catering to a small and stable voter base who could be prioritised at the expense of all others.

The decimation of the electorate by emigration may not be as severe now as before, but the surge in emigration figures after the economic crash should have provided us with a reminder that we can still be left with a political culture that is deprived of a large number of younger voters. Whilst turnout may be lower amongst the under-30s than amongst the general population, this shortfall is only exacerbated by an unwillingness to enable many Irish citizens to vote despite being habitually resident in Ireland. Given that we can’t all marry a diplomat or join the army so as to ensure that our voices are heard, perhaps it is time we reformed our postal voting system rather than dismiss 60,000 people’s opinions out of hand on the callous reasoning that “They left, didn’t they?”

Such a counter-argument to voting reform as “they left, didn’t they” is revealing, and particularly relevant when considered in the context of the discussion which the marriage equality referendum has opened up over what kind of a republic we are or wish to be. For too long, we have been an exclusive society, from the sectarianism which defined the early days of both Irish states to the illegality of homosexuality and repressive treatment of women in the workplace to the shameful citizenship referendum of 2004 which saw nearly 80% of voters opt to restrict the rights of those who would be born and raised in Ireland to participate in our republic as equals. Only now are we finally beginning debate and to undergo a serious effort to alter the restrictions which have excluded members of our society from fully participating in our democracy, an attitude sadly extended to emigrants.

For me, allowing Irish citizens living abroad to vote is simply a question of inclusiveness. Citizenship is an emotive experience, and being out of the country on polling day doesn’t make someone any less Irish. If we are to be serious about granting full equality to all of our citizens, then the next step is to make it possible for them to participate more fully in our democracy by making it practically viable for them to exercise the voting rights to which they are already legally entitled. It is quite one thing for a republic to deny its citizens voting rights, another to make them an irrelevance by denying citizens any feasible means to exercise such rights. Reforming our postal vote system so as to ensure that some of the 60,000 Irish people abroad who’re eligible to vote can have their voices heard is a step towards righting these wrongs to build a more inclusive republic.

Share this article -
Published May 19th, 2015
Tags vote voting
Can this be improved? Contact editor@spunout.ie if you have any suggestions for this article.