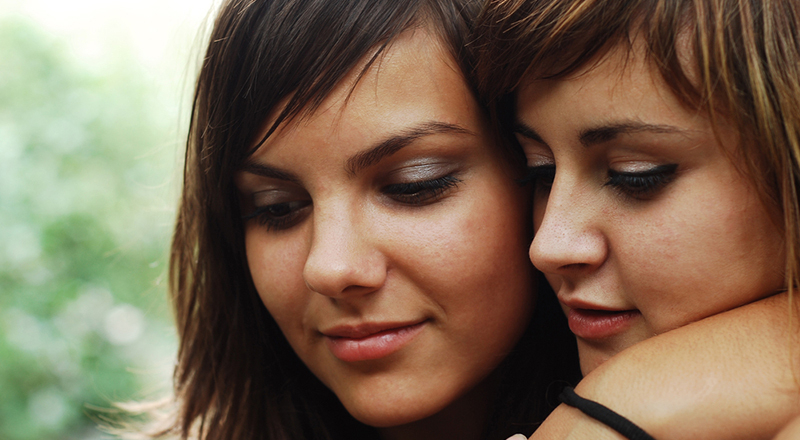 Am I a real lesbian?

"Since coming out, I have struggled to fit into the status quo 'lesbionic' roles"

Inside the bathroom door of The George, at one of our dedicated dyke nights 'Pussywagon', I stop dead in my tracks. Two lesbians stand before me at the washbasins, engaging in what I can only imagine to be a new form of lesbian foreplay.

Head bent to one side, revealing a partially shaved hairstyle, one girl directs another's hand across the shaved portion of her head, resulting an audible squeal of excitement from the other. As the night continues, the number of lesbians I encounter with similar hairstyles increases, and I can't help but self consciously stroke my own long untouched hair. For not the first time I find myself wondering...Am I a real lesbian?

Since coming out, I have struggled to fit into the status quo 'lesbionic' role. I've suffered infected piercings, spent a ridiculous amount of money on Topshop shirts, purchased high top runners - hell I even bought a GOLA side bag not too long ago (our ownership of these bags must now be a two to one ratio girls!), and yet I can't help but wonder whether this style is my own, or whether it is merely a style I feel I should own.

"You're not very lesbionic..." so goes the opening line of an article I wrote a few years back for Ireland's main LGBTI+ magazine - Gay Community News. This observation on my appearance was made by a 'butch' lesbian at an LGBTI+ youth group that I happened to be attending for the first time. So why did the girl that I refer to view me as being not very 'lesbionic'? Was it because I had long hair of a certain length, which was and still is untouched by the blade of a razor? Or perhaps it was my light foundation and eye make-up that made her sceptical of my sexuality?

This scepticism towards women who don't fit into the stereotypical 'lesbionic' image (short hair, piercings, tattoos, boyish clothing etc) is rampant on the gay scene. Due to this, 'fem' lesbians can often feel pressured into disowning their femininity when they first hit the gay scene. I know one such 'fem' who completely transformed her appearance, following constant negative attention and questioning about the authenticity of her sexuality from her lesbian peers.

True, in many cases, 'fem' girls appearances drastically change because coming out gives the girl in question the confidence to ditch the dress she has hated for the past few years and sport the clothes that reflect the real her. Yet, like the girl I speak of, there are a number of girls that feel that they have no other choice but to disown their femininity in order to be accepted by both the straight and LGBT community as a credible dyke.

Scepticism towards 'fem' girls who claim to be gay not only stems from the lesbian community, but also from people who are outside of it. Heterosexual men in particular are sometimes guilty of disbelieving 'fem' women's assertions that they are gay.

I know one 'fem' girl who constantly gets harassed on nights out with her straight friends in straight bars. On numerous occasions following a night out, she has joked about shaving her head and exchanging her dress for a checked shirt. "Maybe they'll believe me then and f**k off" she recently exclaimed, understandably frustrated.

Sometimes this change of 'image' upon coming out has nothing to do with external pressure or judgement. It seems like many of us can feel an internal pressure to conform to the stereotypical lesbian image that we have perhaps grown up seeing in the media. Our own rationale tells us that upon coming out, we must ditch our old 'straight' self and embrace a whole new look. It's like we become plain and simply a lesbian, as if there is nothing else to our person that defines us. Aren't we in danger of transforming into les beings, rather than human beings that just also happen to be gay?

For some of us who were perhaps bullied about our sexuality, is this change of 'image' essentially a defence mechanism? A statement, showing the world and perhaps those people who made us feel ashamed that we are now proud of who we are? There is nothing wrong with being proud, but if this is the only reason why we are changing our appearance is this really healthy? Aren't there other ways in which we can show the world that we are proud of being gay? Pride for example?

I should add that if you are a lesbian who genuinely loves the style that you sport and fashion that you wear, whether it include a Gola bag, a pair of high tops or a partially shaved head (it is a hot look), then keep doing what you are doing. Coming out is all about embracing who you are, and if this is part of the real you, then more power to you!

Yet for those gay girls that are content with their high heels, dresses and rapunzel like locks, who may be contemplating a number two hairstyle in a bid to fit in with other lesbians, then please PUT THE RAZOR DOWN! Despite what some girls would have you believe, there is no lesbian commandment book, written by some legendary figure from the island of Lesbos (I am picturing a Frankie/Shaneesque figure), that you must abide by in order to be a true lesbian! FACT.

As I write the conclusion to this article I have just been informed by a reliable source that the shaved head look may now be on its way out. Apparently, straight girls have taken a liking to it, and this has somewhat ruined its dyke street cred. That's the problem with trends isn't it? They're hair today, gone tomorrow.

Share this article -
Published March 10th, 2013
Tags sexuality lgbt lesbian gay
Can this be improved? Contact editor@spunout.ie if you have any suggestions for this article.