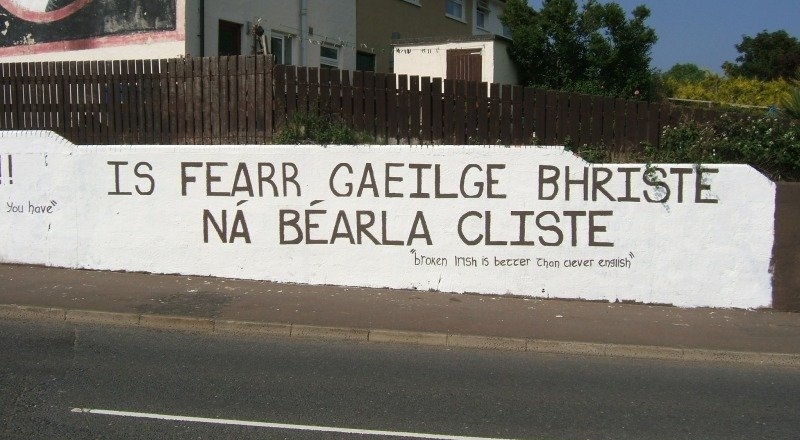 Is learning a cúpla focal really worth it?

Cormac O Malley took to the streets of Dublin to ask people what they think of the Irish language.

Written by Cormac O Malley and posted in opinion

Completing the task of asking people their views on Irish was an inside-out looking task for me. Having attended an all Irish speaking primary school, learning Irish was instilled in me from an early age. The isolation that was felt by fluent speakers existed for me all the way up to Leaving Cert. Many of my fellow fluent speakers simply felt that secondary school Irish was a rehash of what we did before, rather than something that got more difficult. But great unity was seen in our class by the collective’s hatred of poor Peig Sayers.

Talking to people on bustling Grafton St, I learned how the majority felt about the language. The responses were not surprising. I asked each person how they  would promote the language, and as usual they said that they would reform it as a subject and make it more oral. Surprisingly, the majority did not advocate making it choice for the Leaving Cert.

One particular gentleman advocated making a European language mandatory for the Leaving Cert, as well as dividing the Irish subject in two. Under his policy there would be one subject for Irish literature and another for Irish conversation.

Someone else I interviewed described the 80,000+ living in Connemara as being privileged and getting hand-outs for speaking a dead language. He did make an interesting point when he said that it’s not for the government to promote the language or spend money on the language, because there’s a limit in the effectiveness of said techniques.

He pointed out the explosive popularity in response to Coláiste Lurgan’s rendition of ‘Wake Me Up’ by Avicii. More examples of contemporary approaches to promotion would be Des Bishop’s documentary about learning the language (In the Name of the Fada) and Bernard Dunne’s documentary, ‘Bród Club’.

At least the above examples might reignite a love for the language in young people, but the education system seems to be failing at sparking that reaction. Each and every Irish person I interviewed between the ages of 18-50, seemed to be critical of not what they were taught but how they were taught the language. There was a lot of remorse also. Many people around their early twenties seemed to wish they knew more.

They wish they listened more in class or that they went to the Gaeltacht. I myself had the pleasure of going to Coláiste Lurgan three times and I must say that some students went there for the language, while others went for the craic. However, some people, including myself, went to both improve their dialect and have a lot of fun.

In conclusion, here in Ireland we are essentially on the exact same journey as the Welsh in trying to preserve our language. While I have tried for the most part to keep my opinions to myself in this article, I do believe the language to be intrinsic in our culture and our heritage. My mother instilled that in myself and my sister from a young age. It would not be fair to say that being fluent makes you more employable- for the most part it doesn’t.

Neither would it be fair to say that only those who are fluent are ‘truly’ Irish- on that logic only a fraction of our population would be ‘truly’ Irish. But the cúpla focal can be useful when trying to impress a few tourists, when trying to celebrate your patriotism at a sporting event, when trying to learn the words of our national anthem and when visiting Ireland’s answer to Hawaii (Connemara).

I would encourage you the reader to pick up even just the cúpla focal. Doing so and being active in the language’s preservation can do no harm. If you do so, go n-éirí an t-adh leat.

Share this article -
Published July 15th, 2014
Last updated July 30th, 2018
Tags gaeilge irish language
Can this be improved? Contact editor@spunout.ie if you have any suggestions for this article.