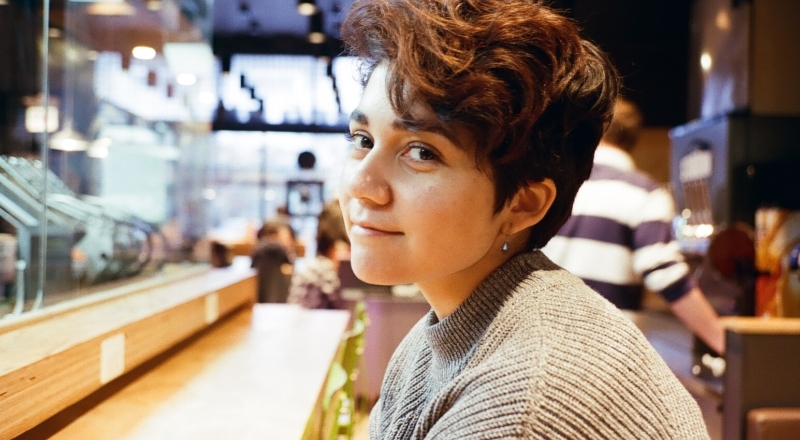 Why we need more open conversations about eating disorders

Living with Bulimia Nervosa, Aiyana looks back on the difference open conversations could have had over the years

Written by Aiyana and posted in voices

I am 17 and I have struggled with Bulimia Nervosa for two years. I guess my relationship to food and my body has been rocky for much longer than that. I can't remember being an overly self conscious child. I ate without obsessive thoughts about the nutritional value of my food and how my body was digesting it and where all the sugars and fats would be stored. I don't remember feeling uncomfortable with food in my stomach or even considering doing something to rid myself of it. I don't remember feeling so out of control when I ate a full packet of biscuits without managing to stop myself. I don't even remember caring.

That changed when I became a teenager. I started putting on weight, which of course is natural and necessary for growth. I started getting breakouts and my boobs developed. I hated all of it. It didn't help that I went through horrible monthly cycles of critical thoughts, bloating and social exhaustion. Fuck periods, honestly.

Then the spiral out of control came. I had many huge changes in my life all piled on, in one go. When I first purged it was such a sense of relief. I could go on with my day without hating myself. But I had no idea the danger I was putting myself in that first time. I didn't know that I was starting something that would develop into an overpowering urge to throw up no matter how much I had actually eaten.

My eating disorder came from somewhere right? The feelings were there already. There is every possibility I could have developed any number of other destructive coping mechanisms (some of which I also have anyway), had I been in the know about how an eating disorder would affect the rest of my life. I think eating disorders (EDs) are still one of the most stigmatised and least talked about mental health issues. I didn't even know the name for what I was doing until almost a year after I started. I didn't know the health risks. I didn't know how hard it becomes to stop the longer you do it. I didn't know how dangerous it was to allow myself to normalise it, rationalise it.

Despite this, somehow the shame, guilt and fear of negative reactions still reached me. I stayed quiet and suffered alone while self destruction became my comfort zone. I can't help but think, what if the conversation about EDs was as open and compassionate as talking about self harm, depression or anxiety? It would have made a huge difference to my life. To understand the underlying psychological distress (for me it was feeling an utter lack of control in my life) and have others understand too. To have felt comfortable to come forward sooner and be received with kindness. To have others understand the urgent response that it requires. To be shown the way to treatment and be supported through recovery. To have the underlying causes recognised and acknowledged. To not have been met with anger and not have the issue brushed under the rug and never mentioned again.

I mean seriously there is so much conversation about the importance of positive body image because of the damage done by the media, advertising, and just general narrow societal views of beauty. Yet we don't talk about the huge effect that low self image can have in people's lives. Negative body image is of course only one part of it, but surely this awareness should be opening the floodgates of this crucial conversation? Eating disorders have the highest mortality rate of any mental illness. Where are all the services? Where is the knowledge of how to recognise the warning signs and what to do when someone confides? Where are the talks in schools?

Learning about eating disorders in school

They have a tiny section at the end of the digestion chapter in the leaving cert biology course about EDs. And you know what they call it? A digestive dysfunction. For real like?? They skim over it in five minutes, put up a few extremely triggering pictures and talk about it as if nobody in the room could possibly have an eating disorder. As if EDs are an ultra rare occurrence that happens to some people way out there in the world. But you know what? Disordered eating habits and a bad relationship with food is very common even if they aren't full blown clinical disorders.

This topic deserves and needs so much more attention that one singular slide in one singular module in biology, a subject that many people don't even take. It needs to be talked about from a younger age and people need to know all the tools and supports that could save someone from going any further down the rabbit hole. It's hard to talk about. I know. But you know what's even harder? Dealing with this every fucking day. We could save so many lives.

Supporting and helping each other

So if you're reading this and you don't know what to do, I encourage you to move past your discomfort and start taking some action. Be aware that if you know someone with an ED who says they are managing it themselves and they don't need treatment or therapy, they may not yet realise how serious the situation is. This is a complex issue. It is frustrating and emotional for us and also for those around us. I recommend you educate yourself. It's the only way you can help.

If you are someone struggling with an ED, just know that you are loved and you are worthy and you deserve to fucking live and be healthy and happy. Reach out. Fight the fear and reach out. You deserve so much better than this.

Share this article -
Published March 26th, 2020
Can this be improved? Contact editor@spunout.ie if you have any suggestions for this article.