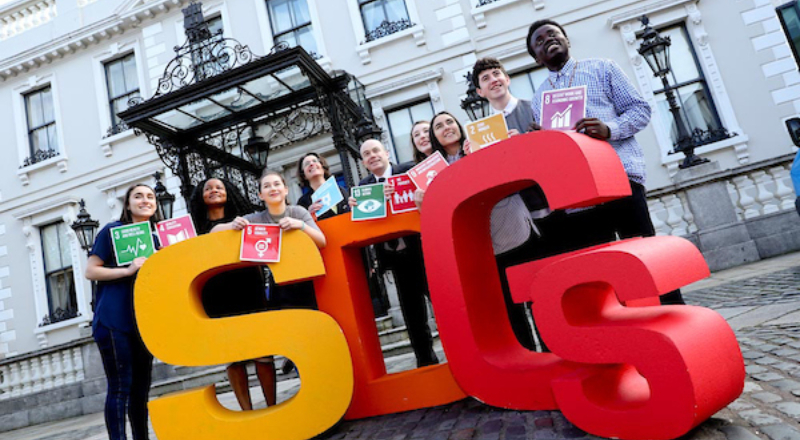 Share this article -
“This is the generation that can end hunger … in the week a couple bought a flight to the moon, it’s about time.”
These were the words of Olive Towey of Concern Worldwide, one of several speakers at Dublin’s Mansion House this week for the formal launch of Coalition 2030. This new alliance of over 100 civil society organisations has one clear goal in mind: for Ireland to do its very best to combat hunger, inequality and climate change around the world.

Coalition 2030 is calling for an ambitious national action plan to achieve the list of international targets known as the Sustainable Development Goals. Championed by Irish diplomats at the United Nations, the Sustainable Development Goals or SDGs represent a major global push to raise living standards and build a greener planet by the year 2030. There are 17 distinct goals within the SDGs, made up of some 169 measurable targets.

By all accounts, achieving the SDGs will be a major undertaking by governments and citizens all over the world. The leaders of Coalition 2030 want to make sure that Ireland builds on its leadership role in global development and takes some key actions right away. The group are calling for three main actions from the Government as soon as possible:

Speakers at the Coalition’s launch warned that there were areas in which Ireland was going to have to really step up its game. In 2017 the percentage of the national budget going to international aid will be the lowest in 17 years. The country is also lagging behind in its commitment to tackling climate change, compared to other developed European countries.

Yet the speakers at the Coalition 2030 launch are confident that much can be done if there is the right public and political will. Ireland’s UN Youth Delegates Samantha O’Brien O'Reilly and Colm O’Rourke set a hopeful tone in their role as hosts, while Suzanne Keatinge of Dóchas was far-reaching in her opening comments, saying:

“The SDGs represent a political, economic, environmental and social manifesto for the world over the next fifteen years. Their success has the potential to be one of the most important turning points in modern history”.

You can find out more about the Sustainable Development Goals here.

SpunOut.ie is a proud member of Coalition 2030.

Share this article -
Published March 2nd, 2017
Tags development sustainable development climate change united nations sdgs
Can this be improved? Contact editor@spunout.ie if you have any suggestions for this article.
Jump to related articles
Was this article helpful?