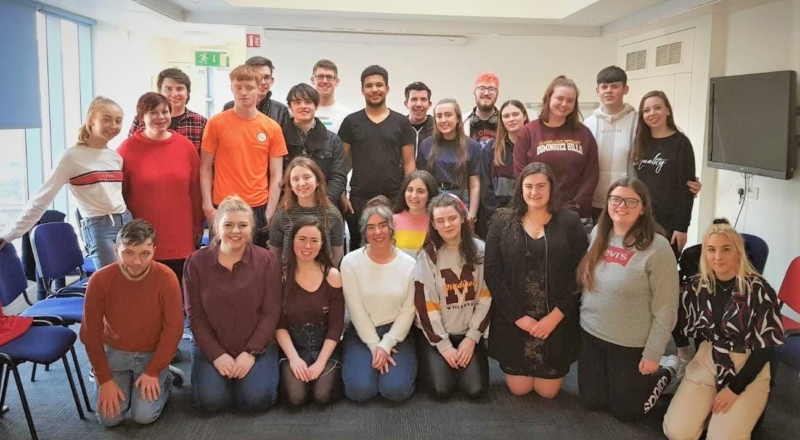 How SpunOut.ie's Action Panel has helped my confidence

Written by Roisin Murphy and posted in opinion

A chance to be independent

As someone that has grown up in a very rural area in Mayo, even travelling to Dublin by myself for the first time for my first Action Panel meeting in 2017 was a huge deal for me, but I pushed myself to do it, and I’ve been so grateful ever since that I did.

In the beginning, I was slow to start pushing myself out of my comfort zone and taking more opportunities that SpunOut.ie offered, but once I did, I couldn’t stop. I’ve attended so many events, often getting on the 5.30am train from Castlebar to Dublin Heuston to do so (Thanks to my parents, brother and sister for all the lifts to and from the train station!) As someone who was painfully shy as a child, I would never have seen myself going to events by myself in places like Twitter HQ, or the Shelbourne Hotel, but I have, and I look back on memories of these events so happily.

In September 2018, through SpunOut.ie I got the opportunity to travel to Vienna, and take part in an International Youth Reporter Training, and attend the EU Youth Conference, putting my newly found reporter skills to work by creating a video about the event. If I hadn’t joined the Action Panel, I would never have gotten such a unique opportunity and I definitely never would have developed the confidence to do anything like this.

In November 2019, I acted as a Rapporteur at Youth Work Ireland’s Positive Sexual Health Conference, which meant that I attended the workshops, listened to guest speakers and generally chatted to young people that attended the conference. When closing the conference, I summarised the event and the main points that I took from it on the stage in front of a few hundred people. If you had told me a few years ago that I would have the confidence in myself to do that, I definitely wouldn’t have believed it! Being part of SpunOut.ie’s Action Panel has helped build my confidence so much.

From being on the Action Panel, I also gained the confidence to begin writing pieces for the website. Suddenly I was publishing my feelings and views on topics, as well as my struggles with mental health online for the country to see. I have received so much positive feedback from family, friends, and even strangers, for my writing.

Before I joined the Action Panel at the age of 20, I felt that I had “missed the boat” in terms of getting involved in any sort of youth organisation, as many had a set age at 18 and under. But when I found SpunOut.ie’s Action Panel, I met such a diverse group of people, aged 16-25, who all have something unique to bring to the organisation. Through being on the Action Panel I’ve also met some of my closest friends, whose friendships I really value and intend to keep for life.

I can’t begin to measure what SpunOut.ie has given me in terms of confidence, experience, friendships and so much more, and to anyone who’s even considering applying to be a part of the Action Panel, I would say go for it! Take the leap of faith, and you will be so thankful you did.

Be part of something special and apply to join the SpunOut.ie Action Panel

Share this article -
Published Jan­u­ary 21st, 2020
Last updated Octo­ber 28th, 2020
Tags opinion action panel spunout.ie volunteering spunout.ie reporter
Can this be improved? Contact editor@spunout.ie if you have any suggestions for this article.