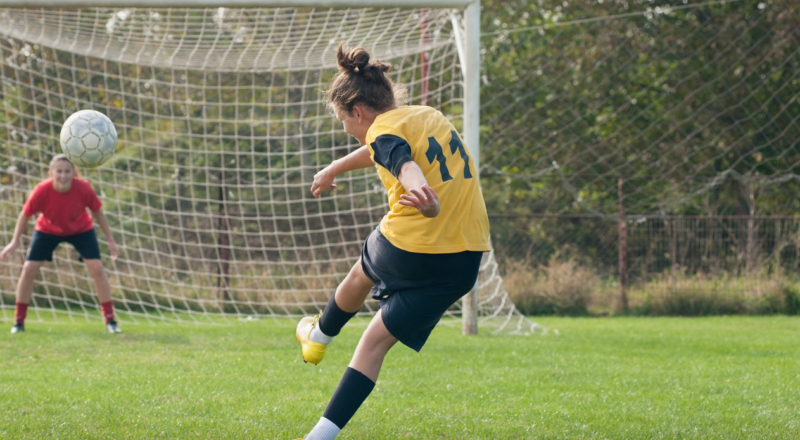 How sport has positively impacted my life

Having played many sports over the years, Aine talks about how they've helped her become the person she is today

For International Women’s day I wanted to write a piece on how sport has impacted my life so before I begin, let me introduce myself. My name is Áine and like you, I play many different roles in my life. When I am at home I am a daughter, a sister, and an aunt; in work I am a project lead. At weddings I am a singer; at parties I am an extrovert. As a friend I am a guidance counsellor and a storyteller but when it comes to sport, I am confident and I am me. Notice how I phrased my sporting role slightly differently? Well, there’s a reason for this. When I sat down to describe my relationship with sport I wasn’t thinking of adjectives. I was thinking of feelings. These feelings have been a part of me since the very first day I picked up a football at the age of 7.

You see asking me how sport has impacted on my life is the equivalent of asking me how having brown eyes has impacted on my life. Both have been there since as long as I can remember and without them, I would be insanely short-sighted. I think for me personally, playing sport has provided me with a greater perspective on life and has truly shaped the person I am today. Sport has given me confidence and taught me how to be an effective communicator. It has given me a purpose while positively fuelling my self-esteem. It has forced me to appreciate both the victories and losses, despite not knowing it at the time. It has led me to some of the most amazing friendships. It has given me this inner grit and resilience to overcome any obstacle but above all, it has made me feel empowered.

When I step onto that field in hail, sleet, or snow, it doesn’t matter what kind of a day I’ve just had because now my problems are replaced with a completely different set of problems like the next pass, stopping my marker, or being able to say I gave it my all. Mentally turning up isn’t always easy but when I do, everything else falls into place. My mind is at ease despite my performance conveying the very opposite. I can honestly say that I have never regretted a training session; no matter how weak or strong my performance was because it meant I still turned up. The only training sessions I ever regretted were the ones I didn’t attend and that to me speaks volumes.

I’d like to take you back to February 7th 2012, or how Mom likes to refer to it as “the day Áine lost her shit”. It was the night before Senior Cup Hockey and unexpectedly I got dropped off the starting panel after 6 years of always starting (and winning). When my words failed that night, my hockey stick certainly spoke as I hurled it at a nearby wall. Unnecessary? Yes, but try telling that to a 17 year old who had never known the meaning of the word “sub” before. So I completely fell apart and couldn’t even bring myself to go into school the next day. The phrase “Sure Brian O’Driscoll didn’t even start Junior Cup Rugby” was a phrase that would haunt me for the next few weeks.

I had never felt disappointment like this before and to say it’s exactly what I needed was an understatement. Sometimes we think we have been buried but in actual fact, we have been planted. Consequently, I like to think that as a result of this experience I grew roots that would be much stronger than any storm that was yet to come in my sporting career. Because after being dropped something funny happened, I not only got over it but I also became more resilient and realised that I was in actual fact too invested in the sport and that my perspective wasn’t right. Not only did it teach me resilience but as both a coach and player it made me more empathetic towards others, the human aspect of sport and sometimes inhumane aspect of sport.

Being on a mixed team has opened up my eyes and taught me that being equal in sports is in fact possible. Being on a mixed gendered team brings a completely different dimension to the field. Even though the men might be stronger physically, I find women tend to think more and act differently which is just as important. So when I’m playing mixed I ask myself what I can bring to the team as opposed to what my gender can bring, because on the pitch, I feel equal. Mixed equalises me. As a woman in an up-and-coming sport and in an even smaller county, this often means sucking it up and playing with the men’s teams. I’ve always enjoyed this mental battle because for them they’re thinking “Oh shit, I can’t get beaten by a girl” and when they do start to feel like that, well the battle is already half won, isn’t it? For me, it’s a case of “nothing to lose and everything to prove” and if anything, it actually forces me to play harder and with even more confidence. So if I do get beaten by a boy, at least I turned up and if I just so happen to beat a boy, well those feelings of empowerment come right back in, just like clockwork.

The 20x20 campaign focuses on creating a cultural shift in our perception of girls and women in sport and it is something that I feel really strongly about. When I was younger and you asked me who my sporting heroes were I would have said Paul O’Connell, Ciarán Carey, or Henry Sheflin but ask me today and you will get a completely different answer. In fact Sarah Carey, who is the daughter of Limerick hurling superstar Ciarán Carey, has been making headlines of her very own in the last few years. Sarah was the Limerick Senior Ladies Camogie captain from 2015-2018 and wasn’t 3 weeks after giving birth before playing a county final with Granagh vs Ahane and winning! Another sporting hero of mine is Limerick's finest Róisín Upton, the Irish International hockey player and world cup 2018 Silver medallist. I had the pleasure of growing up and playing beside Róisín from the very first day we started football together right up until senior cup hockey. Róisín continues to inspire young girls all over the country and if anything, she has given me hope that the future of women’s sport in Ireland is only just getting started. I realise that I only named two women but in reality, I could go on for days, something I wouldn’t have been able to say 2 years ago. Our time in history is finally coming, and it’s about time, don’t you think?

So here’s to women in sport, may we know them, may we be them, and may we raise them!

Share this article -
Published March 8th, 2019
Last updated Sep­tem­ber 18th, 2020
Tags opinion sports international women's day empowerment
Can this be improved? Contact editor@spunout.ie if you have any suggestions for this article.