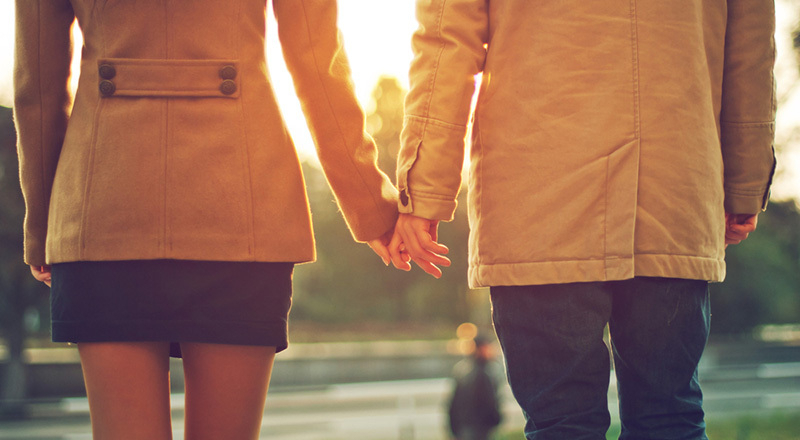 Is there less PDA from lesbian and gay couples?

I wanna hold your hand.

“I just saw two girls holding hands and kissing on Henry St!” No, the source of this exclamation did not come from a heterosexual girl, it was uttered by yours truly. “And?” my lesbian friend replied nonchalantly. This led us into a conversation regarding public displays of affection between lesbian/gay couples in Dublin.

Whilst I knew that she, like myself, was ‘out and proud’, I wasn’t sure whether she herself had ever held hands with a girl whilst strolling around the city centre. As it turned out, she did/does and always will. "If someone is really 'out and proud' then what’s the problem?” And so, being a lesbian who doesn’t usually feel comfortable enough to walk around in public holding a girls hand, her characteristically blunt response got me thinking; am I really as ‘out and proud’ as I claim to be?

From speaking to other young gay people, I have learned that I am not the only person who feels uncomfortable engaging in PDA with a partner. However, whilst some of these responses consisted of a blanket no with regard to public displays of affection (PDA). Others said that it depended on the situation/area that they happened to be walking in at the time, or how much alcohol they had consumed.

George's St in particular proved to be the section of town where most of the Lesbian/Gay people I spoke to had already displayed PDA towards a partner. However considering that two of our biggest gay nightclubs are situated on this street, and that George's St is pretty much considered a gay area from the LGBTI+ community’s perspective (Gay Charlie’s anyone?), does this really count?

When asked why they felt uncomfortable about being publicly affectionate towards their girlfriend/boyfriend in particular areas or when sober, concerns about their safety and about not wanting to draw any “negative attention” continually arose. Despite my friends seemingly black and white opinions, aren’t these concerns valid ones? Is someone really guilty of being ashamed of their sexual orientation because they feel it is prudent to not display PDA with a partner in an area that they feel unsafe?

Or should they battle against the fear/discomfort that they feel and refuse to hide whom they love? Can things ever change in our city if we don’t fight homophobia by defiantly and unashamedly revealing ourselves in public? Whilst the aforementioned opinions/concerns regarding PDA were elicited from both male and females, I can’t help but notice that on the rare occasions that I have spotted a gay couple expressing PDA towards one another, they have been female.

Feel free to correct me if you believe I am wrong, but personally I believe that this is because the general public is more accepting of PDA between a lesbian couple than they are of  a gay couple. Perhaps this is down to the whole phenomena of the ‘bisexual’ within pop culture. Whether it’s Katy Perry singing about kissing a girl and liking it, Madonna wearing the face off Britney on an MTV awards show or Jesse J coming out as bisexual, people are becoming familiar with either hearing about or witnessing two women kiss, not to mention the fact that the majority of straight men are more than pleased to view such a scenario.

I still feel that two gay men walking down Henry St, hands entwined, are more of a likely target for such blatant homophobia (in particular physical abuse), as opposed to two lesbians who do the same. Perhaps this is why, that after many years of walking around town, I can’t remember (apart from one or two vague memories) having seen two men being openly affectionate towards one another.

After speaking to a female Spanish friend of mine who happens to be heterosexual about this particular topic, she was surprised to hear that PDA between lesbian/gay couples was not a common occurrence in Dublin. I was equally surprised when she then informed me that gay/lesbian couples expressing PDA towards one another in her hometown of Madrid was as common and as frequent as the rain here in Ireland! “Nobody cares”, she said with a shrug, “It’s not a big deal.”

Before I bring this article to a close, I should add that I do feel that PDA between lesbian couples in particular has become something that I have been witnessing much more frequently, which can only be a positive step if we are to follow in the footsteps of Spain’s capital city. Meanwhile, I have decided that the next time I find myself browsing on Henry St with a girl that I am seeing, I will take one big deep breath and Beatles style, tell her, “I wanna hold your hand...”

Share this article -
Published Jan­u­ary 11th, 2013
Tags relationships lgbt
Can this be improved? Contact editor@spunout.ie if you have any suggestions for this article.