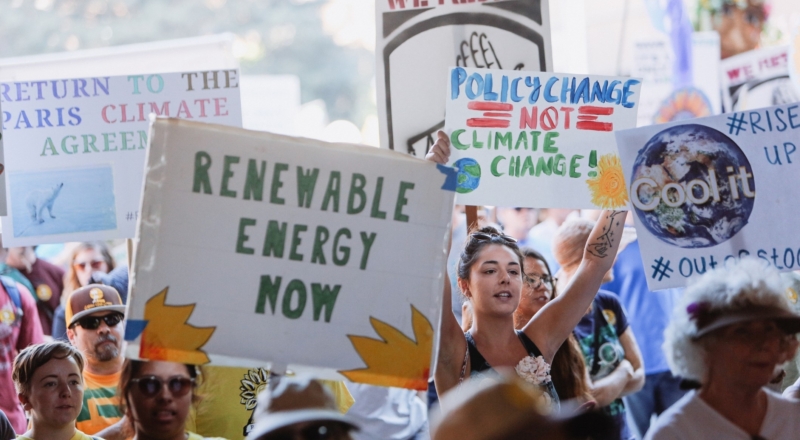 Written by Beth Doherty and posted in opinion

On June 22-23 2020, the Supreme Court will hear a case between the Irish Government and Friends of the Irish Environment (FIE), with FIE arguing that there is a clear lack of action on the climate crisis from the Irish Government. Climate Case Ireland comes at a time when strong, decisive climate action is more needed than ever. The actions we take now will shape our futures. So what is the case about, and how can you get involved?

The impact of climate change

Climate change has become a defining issue of our generation. We have seen millions of young people taking to the streets, demanding change, and refusing to accept the future that has been written for us. At this important time, we aren’t seeing enough action from our governments to protect our futures. Ireland is still ranked as the second worst country in the EU for acting on climate, and ranked 48 out of 60 countries in the 2020 Climate Change Performance Index. We are lagging behind in climate action, and in taking a stand against one of the biggest crises in human history.

There is no safe level of climate change. The Paris Agreement aims to keep us below 2oC, with 1.5oC being a best case scenario. That half a degree may seem small, but it would mean higher rise of sea levels, longer heat waves, and much more. The cost will also be measured in lives, with the World Health Organisation (WHO) estimating 250,000 deaths every year between 2030-2050 as a result of climate change, and 1 billion climate refugees by 2050. The science is clear, we need fast, determined and concrete action now. Yet, governments around the world, including our own, are putting our futures at the bottom of the agenda.

This is where Climate Case Ireland comes in. It’s the first case of its kind in Ireland, taking legal action on the government’s lack of action on the climate crisis. This case was brought by a small NGO called Friends of the Irish Environment, but has grown into a nationwide movement with almost 20,000 people signing a petition to state that the case is also ‘in their name’. The aim is to hold the government accountable , and to take a stand against their lack of meaningful action.

With climate change, inaction is not just standing back, it is contributing to the crisis, dismissing the human cost of climate change, and being careless in the face of a crisis. Ireland itself is not immune to climate change, with 50% of our population living next to the sea we are already at a major risk. This case is a way for us to refuse to allow this to happen, and to fight back against inaction. We want and need a fairer, cleaner and more just future for ourselves, as well as future generations after us.

What is the case about?

Climate Case Ireland argues that the government’s National Mitigation Plan of 2017 is in violation of our Constitution, our Human Rights, and the Climate Action and Low Carbon Development Act. Why? Because the plan is full of gaps, not concrete, and hasn’t set us on a path of reduced emissions. In fact, with the plan in place, emissions have gone up. The case was influenced by the Dutch Urgenda case, in which 900 citizens took a case against their government. The case reached the Supreme Court, and the citizens won! Due to the case, the government had to reduce its emissions more rapidly, and it sparked similar efforts all across the globe.

So, what is the case asking? Essentially, it is asking the Supreme Court to quash the current Plan and to send it back to the Government to make one that is in line with its obligations. This means making an ambitious plan to reduce emissions. Is Climate Case Ireland alone in saying the plan is not up to the task? Not at all! The Chairman of the Climate Change Advisory Committee said “The plan has many ideas for action but it contains very few decisions”.

Get involved and show your support

This case could mean a change in Irish climate policy, a stronger approach, and a recognition of the urgency that we must act with if we want any hope of a liveable future. This case is like no other that has been in front of the Irish courts, and its effects may be heard long after the Supreme Court makes its decision. This is why we, as young people, need to get behind this case and show our support.

On the CCI website, add your name to the case, to tell the Government the case is also in your name. Donate if you can, share the message by email or on social media. Create pressure, to show the government we are listening, we are watching, and we are demanding action. We need to come together with this case, to show that it is all of us taking on the government’s lack of action, all of us refusing to accept what is happening, and all of us deciding to define our own futures. This case is not just about a single court hearing, but about a broader effort to move this country towards rapid and meaningful climate action while we still can.

This case will play a crucial role in creating our futures, in demanding more action from our government. We as young people cannot stand on the sidelines. In 10 years, this period will be looked back on as a time in which we could make change, in which the government was taken to court and in which we took a stand. Our government is not following through with their responsibility to protect our futures. Even if we cannot yet vote, getting behind this case is a key way to get your voice heard, to demand action, and to ensure that our futures are no longer at the bottom of that priority pile.

Share this article -
Published June 17th, 2020
Last updated Sep­tem­ber 18th, 2020
Can this be improved? Contact editor@spunout.ie if you have any suggestions for this article.