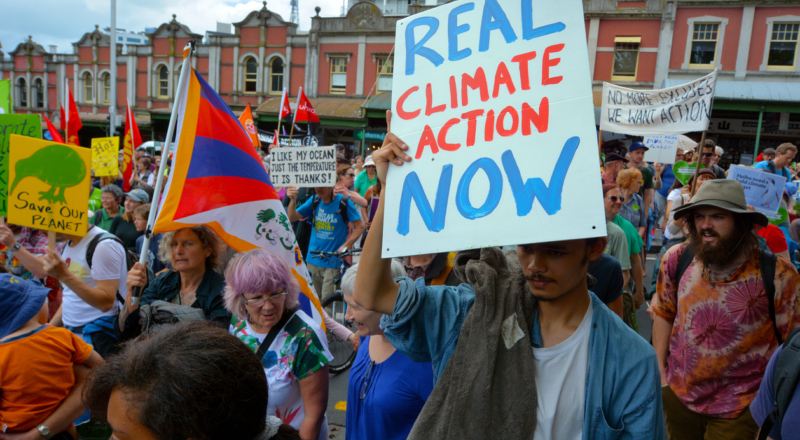 Why I'm feeling inspired after the Climate Action Strike

The global day of action, inspired by Greta Thunberg, is putting pressure on governments to make meaningful change

Written by Sionnach Frost and posted in voices

I received many different reactions when I told family, friends and teachers that I would be attending the Climate Action Strike in Dublin on March 15th. Most people were supportive but I was still met with negativity from quite a few people. Some people assumed that this strike was just a ploy to get a day off school, some thought it was some rebellious teenage thing while some just couldn't understand the point. What difference would a group of teenagers make to the climate? And I'll admit, all the negative comments I heard did put doubts in my mind about the strike, but I went anyway and it was one of the most inspirational and hopeful events I have ever seen in my life.

When I arrived at Molesworth Street, I was stunned by the amount of young people that had gathered there. There were over 10,000 students at the protest, according to 365.org. 10,000 passionate young people, gathered in Dublin City to combat one of the greatest threats the world has even seen and the atmosphere was electric. But of course this was strike not exclusive to Dublin, as students in 123 countries worldwide took to the streets on March 15th to unite against a common human struggle. Myriads of people have come out in support of these young activists both internally in Ireland and on a global level. The Irish protestors were highly praised for how they handled themselves at the strikes. No violence, no chaos, no major injuries and in this regard the strikes were a roaring success. The young people were described as being credits to our generation many people believe that the future of the climate is in good hands.

But despite how well the strikes turned out, there is still one major question on a lot of people's lips; What did the students hope to accomplish from this? And although it may seem to some people that it was just a get out of school free card, there are three major reasons as to why this strike was so important and why it will be for years to come. Firstly, the majority of students attending the Irish strikes were second level students most of whom were under eighteen. These teenagers are not eligible to vote yet and it is frustrating not to have your voice heard, but these national demonstrations proved that just because they can't vote yet, does not mean they are powerless and it certainly doesn't mean they can't have a voice on matters concerning their future.

Secondly, although these protests have not made direct changes to legislation regarding the environment, they have not only put pressure on the government to begin making critical changes, they have also sparked important conversations about climate conservation. Between people's daily conversations and the media coverage, you must have been living under a rock if you had not heard something about the strikes. And as a result of the constant chatter around the climate, I believe people have become more conscientious of how they can do their part to help protect our environment and conserve energy.

Finally, I think that the strikes were a nice reminder that there is still hope for humanity. Most news regarding climate change as of late has been incredibly bleak and it's refreshing and inspirational to finally witness some pushback against global warming. Ordinary people from all over the world are coming together to fight the damage that is being done to our precious home. We have waged wars against each other in the past, we have conquered and claimed lands, but now humanity is facing one of the biggest challenges we have ever seen and I know if movements like this continue, we will overcome it.

Share this article -
Published March 20th, 2019
Tags opinion climate change climate action and environment Greta Thunberg Fridays for Future
Can this be improved? Contact editor@spunout.ie if you have any suggestions for this article.