The change of restrictions has brought up unexpected emotions

The initial easing of restrictions brought about feelings of sadness for Craig who had adapted to life as a teenager in lockdown.

March 12th 2020, a day that our lives took an unexpected turn. The day-to-day running of society would be halted with many restrictions put in place due to COVID-19. Schools closed. St.Patrick’s Day events cancelled. Concerts cancelled. Matches cancelled. Yet, there was a glimmer of hope. A simple phrase, “Only two weeks”.

Two weeks of hell and then back to normal. Sometimes I ponder over this blissful ignorance we all once held, I admire our old assumptions and hope. Two weeks later and we all slowly concluded that this wasn’t over. It wouldn’t be (and still isn’t) over for a long, long time.

Months of uncertainty would follow, reopenings, closings, travel bans, the list could go on and on. In a time of great uncertainty, it felt that there was only one thing we could latch on to, only one constant thing, which may have waived slightly but all-in-all remained familiar: Restrictions.

Especially in a world where being divided is of growing prevalence, more torn apart, these restrictions were a shared, collective experience. We were all in it together. We quickly adapted, we quickly got used to this “new-normal” and tried to make the best out of our collective bad scenario.

Now, it’s been over a year and a half since the first sort of restrictions were placed on us, and it looks as if we’re almost back to “normal”. Although restrictions have varied due most recently to the Omicron variant, concerts had been going ahead, restaurants open, sports stadiums full. This is what we’ve wanted for a year and a half, however, now that it was here, I feel an unexpected sensation of melancholy. Was I glad to be able to do the things, go to the places, see the people, that for so long I had been unable to? Yes. Was I as happy as I thought I’d be when restrictions were eased? Not really.

March 12th, 2020. I was 15 years old. Preparing for my Junior Cert, just a month and a few weeks since my Mocks. Transition Year was on the horizon. Friends were already starting to detail summer plans, what they were going to do next, what the next year or so of their lives would behold.

With the restrictions, those plans came to an end. We were stuck inside. One of the most crucial, transformative periods of a young person’s life and we were stuck indoors. Society was put to a halt, however, that did not put a halt to our transformations and growth. Did it affect it? Absolutely. As I’ve noted already, we adapted. I find that we as humans have an innate ability to adjust to their situations, and continue to live our lives even in uncharted territory.

So, I changed through this time. Made new friends, found new interests, tried new things, grew up a little, all in the comfort of my home. My life did change through this time, welcome change, the change required for me to mature.

That being said, there were tough moments where it felt like too much was changing, nothing was the same, everything was up in the air. The one constant, the one aspect of life which remained in place, was the restrictions. They mightn’t have been all that pleasant but at least they were fixed, not much changing, bar a reopening or two.

Now, I’m 16 a few months from my 17th birthday and as I’ve said restrictions are still here, but not to the same extent as before. Life has seemingly resumed to the scenes witnessed pre-pandemic. I’m still in that transitional, transformative period of my life. As per usual, things are changing, everything feels different, everything feels like it’s up in the air.

The one constant, the one aspect of life which remained in place, is gone. The familiarity of restrictions, the ones that we had all got accustomed to, something that I could latch on to, was all gone, and we were back to “normal”.

Although life may be back to where it once was, I don’t want to be like how I was. Like many people, I’ve changed during the “new normal”, I’m a better version of myself today than I was all that time ago. But now I wonder if I can remain the person that I am, with the conditions that I built that person having been removed.

So what can I do? Things change and we have to adapt. Like I’ve mentioned before, humans tend to be good at that. Us being able to adapt doesn’t make it any less difficult, yet, it has to be done.

One of the things I’ve been trying to do is to live in the moment. If too much time is spent reminiscing over the past or worrying over the future, the here and now will get ignored. To quote American historian Alice Morse Eale, “The clock is running. Make the most of today. Time waits for no man. Yesterday is history. Tomorrow is a mystery. Today is a gift. That’s why it’s called the present.”

Staying in the moment

Practising mindfulness has been helpful with this. Recently, I’ve started to journal every day. Being able to check in with myself at the end of every day and to get my thoughts down on paper has been an amazing way of helping me to manage my emotions and improve my mental wellbeing. Setting aside time each night to do this has been great in adding some structure to my days when I’m not in school.

Life after lockdown is well and truly underway, and for most people, that is music to their ears. To others, like me, this return to “normal” has been a more stressful and worrying period than one would’ve hoped.

I find it important to remember that whatever your emotions are, they are valid. There is no “right” way to feel about a certain thing, it’s okay to feel happy, sad, angry, anxious, scared and whatever other range of emotions you may be experiencing. Leaving a comfort zone is hard, especially when that decision is thrust upon you. However, I hope that with time I can learn to further appreciate this new life and to continue striving to be the best version of myself that I can be.

While there has been recent progress in Ireland, Ruby outlines how we can learn from Netflix' Sex Education in developing a programme.

What happened at the climate change conference in Glasgow earlier this month and will it make any difference? 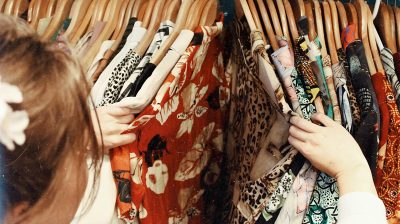 Is enough being done to make slow fashion inclusive?

There have been recent triumphs for inclusivity in the fashion industry but are we seeing the impact in sustainability circles?