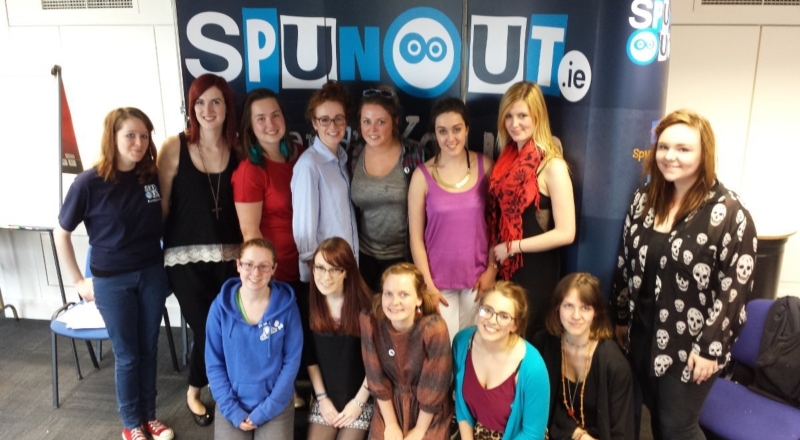 Reflections on the 2014 SpunOut Women's Academy.

"Girl power at it's finest, perhaps with even more energy than the Spice Girls themselves"

What do you get when you put a group of young enthusiastic women into a room who aren't afraid to use the “F Word” freely? - no, not a group of ill mannered females, but a room full of voiced opinions and willingness to make a positive change in their fields of work and areas of interests. And the F word? - feminism. The aim of the intense two day workshop was to equip us with the personal and social skills needed to create a 'ripple effect' in our areas of interest, to get people talking and pick up some nuggets of wisdom along the way.

From debating with politicians, to watching Una Mullally struggle to choose her favorite Nirvana song, practicing mindfulness and running around Temple Bar encouraging people to burst balloons for the sake of artivism and mental health awareness – I've had an incredible two days alongside a group of inspiring young women whom I now have the pleasure of calling friends.

We all arrived at the academy with the same aims – to create, learn and make positive changes, but what we left with was more than any of us could have anticipated. We were treated to presentations and interactive workshops from guest speakers from all walks of life – journalists, mental health activists and politicians to name just a few.

Girl power at it's finest, perhaps with even more energy than the Spice Girls themselves. To have Una Mullally share career advice and her unique opinions on gender inequality was eye-opening, but of course telling a group of young feminists that they “Should be ANGRY” and teaching them to deal with criticism is like preparing them for a battle – Mullally almost spearheading our campaign for positive action, simultaneously creating a danger zone for those who would argue gender inequality isn't “important” in our modern day society. Una's presentation ignited a spark in all of us – a resistance to change for the sake of societal acceptance, and the courage to try, to fail, and to try harder – ultimately, this set us up for all that was to come during our remaining time at the academy.

We also met Donal Scanlan from St John of God's hospital who taught us the importance of mindfulness in our everyday lives and began to solidify our new found friendships through interactive discussions and partner work. He used audio visual representations of his main message – mental health matters. He later took a selfie Ellen DeGeneres would have been proud of.

Later in the day we met Aideen Carberry from the Labour party who encouraged us to use our voices, especially in the workplace, offering words of wisdom : “Don't be someone's doormat just because someone's paying you”. Following this Órla Ryan from thejournal.ie hosted an eye opening interactive political debate with Eilish Ryan, Rebecca Moynihan, Christabelle Feeney and Regina Doherty. Topics included gender quotas and inequality in politics, youth unemployment and soon descended into a fiery mental health debate. I can safely say we used our new found wisdom from previous guest speakers to full effect, “be angry about the world you live in, and angry enough to change it”. Aisling Twomey from Pavee Point used personal career experiences to highlight the need for social change, and also demonstrated her unique approach to criticism. “Even Jesus couldn't convert the world, and you're not him”

We were given the tools to make informed decisions and encouraged to shape our opinions according to our own beliefs and outlooks, all with a sense of courage and self-importance. We rounded off our first day together in the IFI, watching a series of short films which were thought provoking in nature and experimental. We later reflected on our first day together over dinner discussing everything from our college courses to future aspirations, and of course, all we had learned from day one – a wonderful ending to an inspiring first day.

Day two was full of surprises thanks to Niamh Heery and her presentation on artivism. She highlighted the importance of artivism and demonstrated how easy it can be to create a ripple effect in our communities and beyond. She used a series of videos and stories of other artivists who create visual talking points based on current affairs and wider societal issues, without the use of words.

Before we knew it, we were plotting and planning our own temporary art installations across Dublin City, addressing women's rights, women's health, mental health awareness and inequality – equipped with balloons and arts and craft materials, we set to work before creating a ripple effect on the streets of Dublin. We aimed to get people talking, to have a lasting impact whilst getting our messages across – taking action, rather than just talking about such issues highlighted the need for social change, whilst giving us lasting motivation to take matters into our own hands. It was refreshing to see the public get involved (including tourists!) - all of whom left with a smile.

Later in the afternoon we met Patricia Kennedy, an anti bullying campaigner from Sticks and Stones Ireland - and before we knew it, we were learning about the importance of non verbal communication through a series of drama workshops. Following this we were involved with a walking debate with two members of the Y! Factor (an initiative of the National Women's Council of Ireland) – we were encouraged to be opinionated but also equipped with the tools to develop our personal outlooks and perceptions. This interactive allowed  us to discuss a range of issues facing feminists and activists today, cultural identities and stereotypes, and the place of women in Irish society.

The day came to a close following the presentation of certificates and series of photographs together. Thank you to all who made the Academy so memorable, for offering their time and wisdom – and to John and the Spun Out team for their hard work and dedication in organising the the two day event.

Share this article -
Published July 10th, 2014
Tags women's academy activism artivism feminism
Can this be improved? Contact editor@spunout.ie if you have any suggestions for this article.