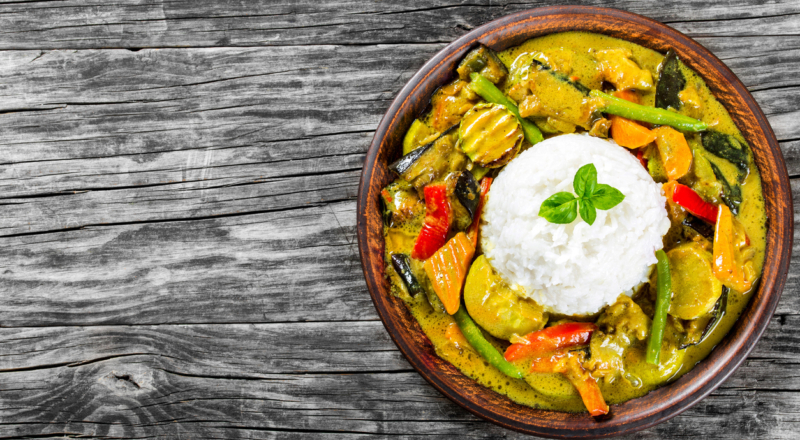 This curry is spicy and full of flavour. It's pretty quick to cook if you're short on time.

Written by Sam Pearson and posted in health

Sam runs vegan food blog greeneggs. Through his recipes and reviews, he is on a mission to show that going vegan doesn't mean you have to miss out on delicious comfort food.

After making the move to veganism a vegan thai green curry was one of the first things I had to put my mind to adapting. Some of the ingredients in this recipe aren’t that easy to get your hands on in normal supermarkets as it is based on a traditional Thai recipe, most notably galangal, fresh peppercorns, kaffir lime leaves and sweet basil leaves. I have put substitutes for all of these in the recipe except kaffir lime leaves (which can be found in most major supermarkets). If you’re up for it, a trip to an Asian supermarket will have all of the ingredients here and more. If not, it will still be plenty tasty with the substitutions.

As with most of my recipes, the veg here can easily be swapped out for whatever you have lying around. If it’s a hard vegetable, just be sure to par boil before adding to the pot. As the mushroom, courgette and aubergine listed here are all quite water heavy, the sauce may be a little thin at first so let it bubble for a bit longer if it’s not the consistency you want after the veg is added.

Share this article -
Published August 29th, 2018
Last updated Octo­ber 23rd, 2018
Tags opinion vegan recipe
Can this be improved? Contact editor@spunout.ie if you have any suggestions for this article.