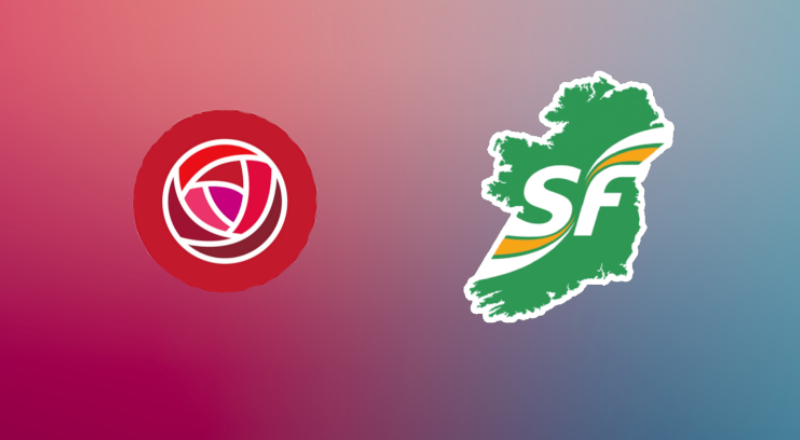 The Labour Party and Sinn Féin are two of the larger left-wing parties in Ireland, but have major differences from one another when it comes to their history and approach to politics.

Sinn Féin is a political party that is active in both the North and the Republic of Ireland, whereas the Labour Party are only active in the Republic.

The Labour Party was founded in 1912 and aimed to represent working-class people and particularly members of the trade union movement. Over time, the party’s focus expanded to include social issues such as women’s rights and equality for LGBTI+ people. Labour has participated in eight coalition governments in the history of the Republic, usually with Fine Gael.

A coalition is formed when a larger party, such as Fianna Fáil or Fine Gael, fail to win enough seats to form a Government, and so they join up with one or a number of smaller parties or independents in order to make up the numbers to form a government and secure their power.

The last coalition government between Fine Gael and Labour and lasted from 2011 to 2016. During this time Labour supported austerity policies (economic policies where the government reduces its spending during a recession) as part of the coalition government. As a result of this, they lost large numbers of seats in the 2016 election down from 37 to seven.

The modern Sinn Féin party came into existence in 1970 and was originally mostly active in Northern Ireland. The party was closely linked with the Provisional IRA and believed in uniting Northern Ireland and the Republic through a mix of violence and political activism. In the 1990s, Sinn Féin ended its support for violence and joined the new Northern Irish Executive (Government) set up under the Good Friday Agreement of 1998.

What is the difference between Labour and Sinn Féin?

Both parties identify as left-wing, meaning they are in favour of stronger workers’ rights, a more equal distribution of wealth, and higher levels of public spending than parties of the right. Beyond this, there are a number of similarities and differences between the two parties.

What are the similarities between Labour and Sinn Féin?

Labour and Sinn Féin agree on a number of important issues.

What are the differences between Labour and Sinn Féin?

There have also been major points of disagreement between the two parties:

Labour supported the introduction of water charges in 2014, while Sinn Féin opposed them.

Labour has backed every referendum on greater European integration, whereas Sinn Féin has been more Eurosceptic (though still supports Ireland’s membership of the EU).

During the period 2011-2016, Labour supported a series of austerity budgets while in coalition with Fine Gael. Sinn Féin opposed these austerity policies.

Austerity is an economic policy which involves the government reducing its public spending. This means cuts to public services like social welfare, as well as cutting funding to various Government departments and state-run organisations, like education or the HSE.

Sinn Féin are currently calling for a ‘border poll’ or public vote on a United Ireland, while Labour has said more work must first be done to convince Northern Irish unionists who currently want to remain part of the United Kingdom.

Although the parties have a number of similar policies, Labour and Sinn Féin have not yet worked together in government on a national level, and there is a considerable gulf between the two parties based on their historic disagreements.

Labour has long been critical of Sinn Féin for its support of IRA violence during the Troubles in Northern Ireland, and for not supporting a peaceful solution to the conflict from an earlier time. Sinn Féin, on the other hand, has been highly critical of Labour’s decision to support austerity policies between 2011 and 2016, which they say disproportionately harmed the poor.

Who else can I support?

Sinn Féin and the Labour Party are just two options among a wide range of political choices for Irish voters. Parties like the Greens, Solidarity, People Before Profit and the Social Democrats all offer other alternatives to the "big two", and it's up to each individual voter to decide which (if any) of the existing parties deserve their support.

Share this article -
Published Feb­ru­ary 18th, 2019
Tags labour sinn féin politics government voting
Can this be improved? Contact editor@spunout.ie if you have any suggestions for this article.

Fine Gael vs Fianna Fáil: what's the difference?
Register To Vote
How to join a political party in Ireland