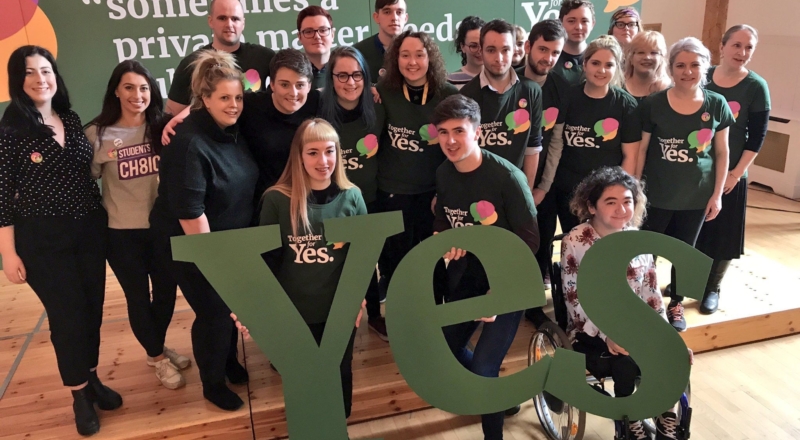 (Picture courtesy of the Union of Students in Ireland)

A national civil society campaign to remove the 8th Amendment from the Constitution has been launched today, Thursday 22 March. The Together for Yes campaign is made up of over 70 civil society groups and organisations across Ireland.

The launch was held at the Rotunda Hospital in Dublin, with Minister for Health Simon Harris in attendance, along with a number of other politicians from across the political spectrum and key campaigners to repeal the 8th Amendment.

The launch of the campaign comes the day after the Dáil approved a bill that will allow for a referendum on the 8th Amendment.

The wording for the text that will replace the 8th Amendment in the event of a yes vote to repeal was confirmed last week by cabinet. Should the public vote yes to repealing the 8th Amendment, it will be replaced with:

This would allow the government to legislate for abortion without the restriction of the 8th Amendment in the constitution.

Together for Yes Launch

MC Martina Devlin opened the launch, stating that this referendum “is an opportunity for the Irish people to say we're prepared to support women, girls, couples, and families” after making the personal decision to have an abortion. “The repeal of the 8th Amendment would allow for appropriate, non-judgemental, safe healthcare in Ireland.”

The room heard from a number of speakers, including:

“As a young man growing up I never thought abortion would affect me, but it has. It affects us all.”

Gaye and Gerry Edwards were forced to travel to the UK during their first pregnancy when they learned that their baby had a condition that was not compatible with life.

The Edwards only had one choice if they stayed in Ireland: to continue with their pregnancy, knowing that their baby would not survive at birth. They made the decision to travel to the UK to receive a termination to end the pregnancy, which they could not get in Ireland.

Gerry Edwards said that he never thought abortion would affect him until he found himself in this situation.

"This is an Irish problem that needs an Irish solution"

Dr. Peter Boylan, Chair of the Institute of Obstetricians and Gynaecologists, argued that the 8th Amendment does not achieve its original aim, which was to prevent abortions.

Dr. Boylan said that abortion still happens in Ireland. Either women are forced to travel abroad, to the UK and elsewhere, or they buy abortion pills illegally over the internet. These pills are safe and effective when administered under the proper medical supervision, but without that supervision, there are significant risks.

The Institute of Obstetricians and Gynaecologists, made up of doctors working in the areas of reproductive health and pregnancy, are taking the position that the 8th Amendment should be repealed so that we can provide this care in Ireland.

The three C’s of the campaign

Ailbhe Smyth, co-director of the campaign and chair of the National Women’s Council of Ireland, put forward three C’s to follow in campaigning to repeal the 8th Amendment:

Getting involved in the Together for Yes Campaign

Campaign Co-Director Orla O’Connor urged anyone who wants to see the 8th Amendment to be repealed to get involved. There are local campaign groups in towns, villages, and communities across the country.

There are a number of ways you can get involved including:

Visit the Together for Yes website for more information.