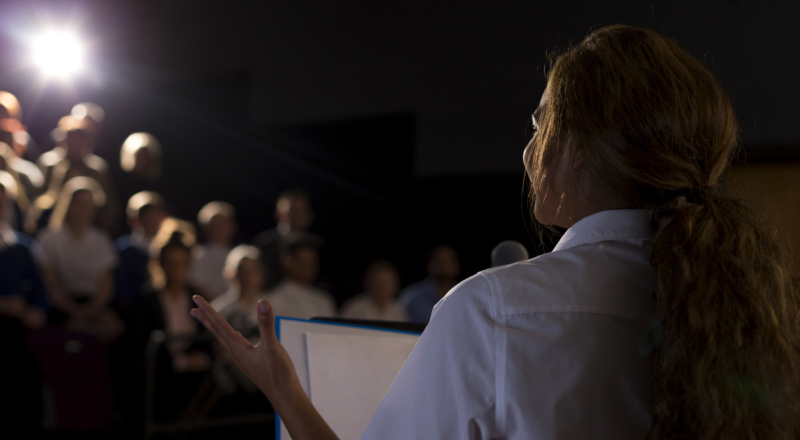 Reporting from Zeminar 2018 - A day full of inspiring talks

SpunOut.ie reporter Mair had the chance to listen to a variety of speakers talk about issues affecting young people

Written by Mair Kelly and posted in opinion

Zeminar is an annual event which is described as “a social enterprise created to bring all those invested in the development and well-being of young people in Ireland to one place.” It takes place over three days. There is a huge wealth of events, talks and stands to visit, all related to young people in Ireland and delivered by influencers, experts and organisations that tackle and address issues that affect young people.

The event kicked off at about nine-thirty and I reached the RDS at about 10:30, met with the SpunOut Team at their stall and then ventured off into the world of Zeminar. Although it was early morning, it was already a hub of activity.  The first talk I went to was Youth Well-being, on the main stage. This talk was given by Stella O ‘Malley, Roe McDermott and Dr. Colman Noctor. Each speaker addressed a different aspect of youth well-being, connecting and belonging, sex and consent in the age of pornography and maintaining well-being in the digital age.

Stella O'Malley spoke passionately about the disconnect many teenager experiences and feel when they’re trying to fit in and belong. She described how instead of “finding your space” you should “take it” instead and how every time you resort to fakery to fit in you bring yourself to a lonelier place. She encouraged her listeners to grow stronger by being their real and authentic selves, own our weaknesses and to “wear yourself as your vulnerable self.” She left us with one final message: “the fear of not belonging is a sign that you are supposed to be somewhere else”

The next topic was one that might be considered slightly more controversial than “finding your true self”. Roe McDermott brought up the topic of sex, pornography and consent. I noticed a wave of shifting nervously in seats and a rise of chatter when she uttered that one word...sex. One boy next to me started fanning himself. This topic is so important and so relevant to teenagers in Ireland at the moment, even though there is a general taboo around talking to young people about it. McDermott described this as “selfishness” and how she believes sex should be empowering. She spoke about how pornography is not designed for teenagers and projects this idea of “fantasy” into young people’s minds, creating a gap between fantasy and reality as pornography isn’t a real depiction of sex. She emphasised that she doesn’t think porn is bad, she just wants people to engage their critical thinking skills when watching it. She asked the crowd to remember the differences between fantasy and reality, acknowledge these differences and engage empathy and communication always.

Dr. Colman Noctor brought up how we live in a comparative culture where we no longer have to “peek through curtains to see how the Jones’s are getting on”. He described how more choice leads to more anxiety and how then this fuels perfectionism. Our on-demand culture can lead to bypassing experiences that build emotion and how human desire needs to be regulated.

“Breaking Through” was the title of the next discussion with Jack Kavanaugh and Rory’s Stories. This was probably my favourite talk. Two very talented speakers. Everyone in the room was hooked on every word they said.

Jack’s talk was titled “Fearless like a child” and through his life story, his childhood, his accident and his journey through that, he described his search for his authentic self. Life through the eyes of a child is full of magic and wonder, he said. There are no limits to their dreams and ambitions and everything seems possible. He described how he felt adults were always telling children from a young age to fear and face reality. He acknowledges how although these lessons are necessary, they also “dampen” the magic. He believes you need to unlearn a certain amount of these lessons and focus on only impressing yourself and how “ the bravest thing a person can do is to bring “their authentic self to the world and then you’ll see the magic.”

Rory also, described his journey, through his childhood and battle with depression, to find his authentic self. Through his ever-hilarious way, he told people to essentially be themselves. People aren’t going to like you anyway and to pursue your goals and not to worry about finding your place. There’s time to explore, to find your hidden talents, just like he did. There’s no need to let perceptions limit you, go after your dreams like your life depends on it.

All of these speakers came from different backgrounds and have very different occupations, opinions and ideas. However they all tried to put across the same message, they all urged the their young listeners to follow their dreams and ambitions and to stay true to their own authentic selves.

It was a great day and a really interesting experience. I’d highly recommend going to Zeminar if you get the opportunity as there is plenty to see, hear and learn about.

Share this article -
Published Decem­ber 7th, 2018
Last updated Jan­u­ary 25th, 2019
Tags opinion mental health wellbeing education zeminar
Can this be improved? Contact editor@spunout.ie if you have any suggestions for this article.