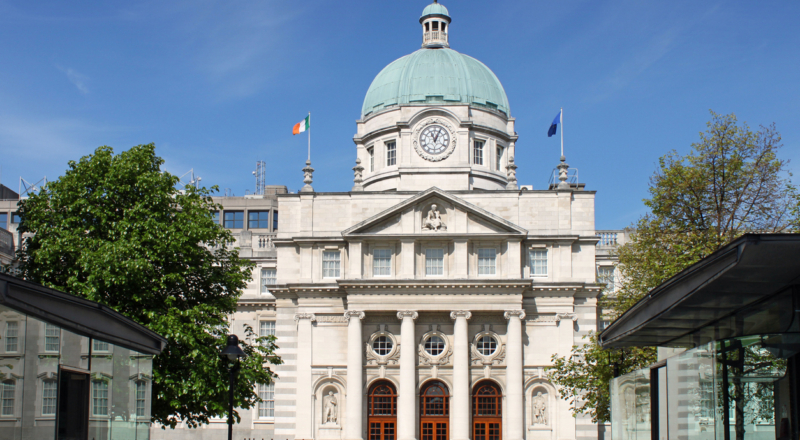 What is Ireland doing about the climate crisis?

Despite the fact that Ireland is a small country with a small population, our greenhouse gas emissions per person are among the highest of any country in the world, according to the Environmental Protection Agency (EPA). We have also already begun to see the effects of climate change in Ireland, and this will only continue to grow worse if we don’t do something about it.

What needs to be done to address the climate crisis?

In order to solve the problem of climate change, we need to act now and dramatically cut our carbon emissions. Carbon emissions are contributing to the greenhouse gas effect, when greenhouse gases like carbon (CO2) and methane cause heat to become trapped in the atmosphere, which then causes the Earth to heat up (global heating), causing sea water levels to rise, increased storms, extreme weather, to name just a few.

To prevent carbon emissions from rising further, we need to stop burning fossil fuels and start turning towards renewable energy sources, and we need to do this fast.

What is the government doing about the climate crisis?

Ireland has been involved in a number of climate talks and agreements over the years, on both an international and EU level. Most of Ireland’s climate policy has come out of these agreements.

However, it’s important to remember that just because the government has signed up to these agreements and has created policy around them, it doesn’t mean they have taken the steps to implement these policies. Although Ireland recently declared a 'climate emergency', the government needs to take action in order to read address the issue.

Most recently, Ireland signed the 2015 Paris Agreement, which was an agreement between all countries (except Syria, who did not attend, and the United States, who were part of the agreement but announced they would be pulling out after President Trump was elected) to:

Before the conference, governments submitted their National Climate Action Plans, outlining what they plan to do to reduce their emissions. The EU submitted a plan on behalf of all member states, agreeing to:

In 2018, Ireland’s Minister for the Environment, Richard Bruton T.D., admitted that Ireland would only achieve a 1% reduction, if any, in emissions by 2020 compared to 2005 levels, meaning Ireland will fail to reach this target.

According to a 2016 report from the Sustainable Energy Authority of Ireland (SEEAI), Ireland is just over halfway there to meeting the overall 2020 energy target of 16%. Thanks to the use of energy efficiency and renewable technology, we have avoided 6 million tonnes of CO2 emissions each year.

However, in order to meet the target in 2020, more action will need to be taken, including increasing the number of wind farms, encouraging people to buy electric cars, and making it a requirement that new buildings are heated through renewable energy. Without significant changes, we are not going to meet our 2020 target.

In 2019, the Government released their Climate Action Plan, detailing what needs to be done to tackle climate breakdown. This infographic gives a summary of that plan.

What needs to be done to meet climate targets, according to the Climate Action Plan?

Here are some of the key areas that need to be addressed in order to reach our targets:

Read more about the Climate Action Plan in this report or view this infographic.

It's important to remember that just because the Government published the Climate Action Plan, it does not mean it has become official policy. Each department will need to make changes in order to achieve the steps laid out in the Climate Action Plan. The Plan does say that the Government will introduce the 2050 climate targets into law, and all new major investments will require "carbon proofing" to ensure they are not having a negative impact on our carbon emissions.

Groups such as the Stop Climate Chaos Coalition and the Environmental Pillar have criticised the plan for being too focused on the short-term and have said that the measures the Government are planning on introducing to reduce emissions are not enough. They also criticised the Government for their plans to continue exploring for fossil fuels off the Irish Coast.

What will happen if the government doesn’t meet their targets?

Ireland’s targets have been set out by binding EU agreements, which means if the government doesn’t manage to meet these targets, there will be consequences. Ireland expects to face fines of €150 million or more for not meeting the 2020 EU emissions and renewable energy targets.

Outside of fines, if we don’t manage to meet our 2020 targets, it will make things a lot harder and more expensive to meet even more important targets that have been laid out for the future. Meeting our targets now will help us when we set out to achieve 2030 or 2050 targets in the years to come.

What about other countries?

Sometimes it helps to look at what other countries are doing in order to get an idea of the limited scale of what Ireland has done so far.

For example, in Costa Rica, a much poorer country than Ireland, 98% of their electrical energy comes from renewable sources. Another example is Bhutan in Asia where they have planted so many trees that they are now ‘carbon negative’ which means the trees they planted absorbs more CO2 than the amount of CO2 the country is emitting.

This goes to show that while there are other, poorer countries are taking great strides and setting examples as to how a country could reduce their emissions, Ireland still has a long way to go.

If you’re concerned about Ireland’s record for taking action on climate, let your politicians and your government know. Get in touch with your local TDs, contact the Minister for Climate Action (currently Richard Bruton), and demand action from your local councillors. Lobbying your politicians on climate change is a way to make your voice heard. You can also make changes in your own life by finding ways to reduce your carbon footprint.

Share this article -
Published May 30th, 2019
Last updated Sep­tem­ber 18th, 2020
Tags climate change ireland environment
Can this be improved? Contact editor@spunout.ie if you have any suggestions for this article.

How does climate change affect Ireland?
How to contact politicians about the climate crisis
What is the Paris Climate Agreement?