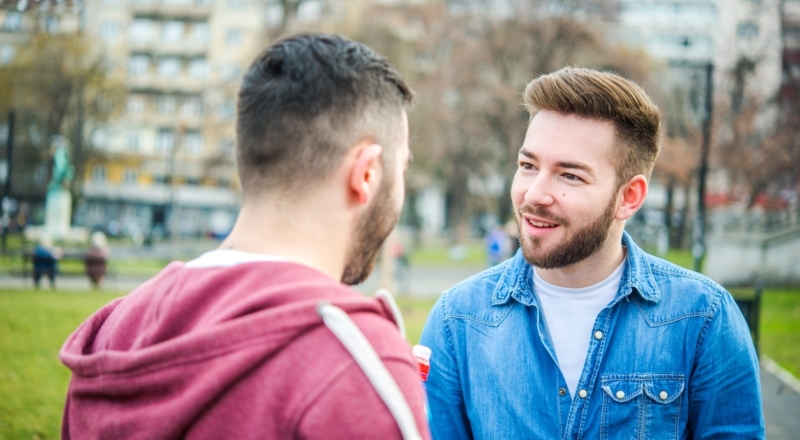 Why should I use someone's gender pronouns?

Understand the importance of addressing someone by their gender pronouns

A pronoun is a word by which we refer to someone without using their name. For example you can say “Sebastian is an excellent dancer, he teaches ballet and hip-hop.” The “he” in the second part of that sentence is the pronoun by which you referred to Sebastian.

Why should I use someone's correct gender pronouns?

All people have correct gender pronouns not just trans people

As individuals we all have pronouns that we go by. Whether we identify as cisgender, transgender, non-binary, agender, or something else if someone uses incorrect pronouns to address us we can feel hurt and disrespected. Take a moment to think of the pronoun you like to be addressed by and reflect on how you would feel if someone refused to use it. Understanding the importance that pronouns can play to our sense of identity can help us all to be more inclusive when respecting each others gender pronouns.

No one chooses at birth which gender they are assigned. Doctors normally make an assumption depending on the genitals that the baby has. By assigning a person male or female at birth, this has the knock on effect of dictating which pronouns a person is normally addressed by eg. he or she.

We adapt to people changing their names regularly

People change their names regularly during the course of their lives such as when a person takes a new surname when they get married or are addressed by a new titled such as Dr., Prof., Ms. or Mrs. We are used to adapting to addressing someone by a new name or title when they get married and it should be no different when it comes to a person’s gender pronouns. Although it can take time to adjust to addressing someone by a different pronoun, in doing so we support those around us and help to create a more inclusive environment for transgender and non-binary people.

Using correct pronouns is a non negotiable part of respect

Addressing someone by their gender pronouns should not be viewed as something which is optional. Using a person’s pronouns is a non negotiable part of respect and should always be supported. If you feel uncomfortable or angered by someone being referred to by their gender pronoun reflect and ask yourself ‘why?.’ There is no reason to feel hostility towards others due to their gender identity and you can cause real hurt by not accepting someone for who they are.

“They” pronouns are completely reasonable and relevant

Using “they” as a singular third person pronoun is a practice which is not new. Take for example were someone to knock on your door and you did not know who was there you might say “I am going to go see who they are.” Using “they” in that instance is correct as you do not know the identity of the person at the door. If a person who is non binary asks to be addressed as they, regardless of whether it is grammatically correct or not, their gender pronoun should always be used as it is part of their identity and important to them.

A person may also use other pronouns to he/she/they such as ze. Using "ze" works exactly in the same way that using "he", "she" or "they" does. For example you would say “Jordan is 24. Ze works at the bank” If you are uncertain whether you are using someone’s gender pronouns correctly just ask them. If you are worried that you may insult them or make them feel awkward by asking them then try to do it when you are alone together instead of in front of a group. Most people will be happy to talk about their pronoun preference once asked about it in a genuine and respectful way.

Although we may have been conditioned by society to assume people’s pronouns, by making a conscious effort not to do so we can create a more inclusive environment for those around us. Making an assumption about a person’s pronoun can be hurtful as it sends a message that people have to conform and look a certain way to show people what their gender is. When addressing groups of people try to avoid binary language such as saying “ladies and gentlemen” or “boys and girls,” instead use language that is gender neutral such as friends, classmates or everybody.

Adding a line to the end of your email that outlines which pronouns you prefer to be addressed by can normalise the conversation around gender pronouns. Other ways that we can help normalise the conversation is by stating which ones we go by if we are in a setting where we have to introduce ourselves such as a workshop. For example you could introduce yourself by saying “Hello my name is Anna, I go by she/her pronouns and I enjoy cycling on the weekends.” By doing this it does not mean that everyone in the group has to do the same thing but you can open up the space for others to feel comfortable to also share their gender pronouns.

Click here to learn more about how to be an ally to the LGBTI+ community.

If you would like to share your experience of how the use of your gender pronouns impacts you email heather@spunout.ie.

Share this article -
Published Jan­u­ary 25th, 2019
Tags lgbti+ trans APcontent
Can this be improved? Contact editor@spunout.ie if you have any suggestions for this article.

Being transgender
How can I make my school a safe space for LGBTI+ students?
Understanding the recommendations of the Gender Recognition Act Report