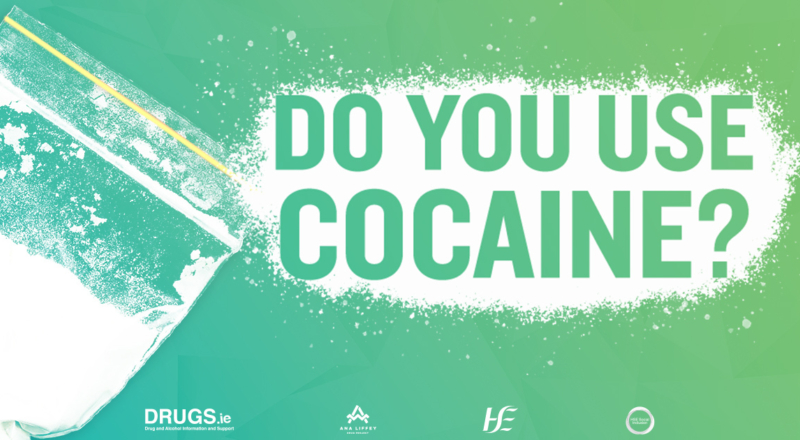 Use of cocaine among young adults in Ireland is on the rise according to a harm reduction campaign launched by the HSE and the Ana Liffey Drugs Project this week. The campaign aims to highlight the dangers of taking cocaine (powder and crack), and to reduce the harm of snorting, smoking or injecting cocaine.

Cocaine use in Ireland

Cocaine has become more widely available across Europe, with Ireland ranking fourth-highest in Europe for cocaine use among young adults.

Cocaine is the third most common drug that those who go for treatment report using, with a steady increase in those seeking treatment for cocaine use over the last few years.

There has also been an increase in cocaine-related deaths in Ireland, highlighting the need for a harm reduction campaign to ensure that those who do take cocaine understand the risks involved and how to minimise them.

It is always safest not to take drugs at all, but if you choose to use cocaine or crack, keep the following advice in mind:

If you decide to use cocaine

If you decide to use crack

For more information, see our fact sheet on cocaine and crack.

Mixing alcohol or other drugs with cocaine or crack

It’s important to be aware that risks are significantly increased when cocaine is mixed with other substances, including alcohol. 93% of deaths involving cocaine in 2015 also showed other drugs were taken at the same time.

There are a number of significant risks associated with mixing alcohol and cocaine, including but not limited to epilepsy, suicide, violence, accidents and sudden death.

Learn more about mixing alcohol and other drugs here.

The harm-reduction campaign was launched on Tuesday by Minister of State for Health Promotion & the National Drugs Strategy, Catherine Byrne.

In particular, the campaign hopes to target regular club goers, as research indicates rates of drug use is higher among those who go clubbing regularly compared to the general population.

Speaking about the campaign, Minister Byrne said she believes this new campaign will “play a vital role in communicating the risks and dangers of cocaine use to dependent users and at risk groups, as well as to those who engage in recreational use”.

For more information on the campaign and to download resources visit drugs.ie/cocaine.

Share this article -
Published July 17th, 2018
Last updated July 18th, 2018
Tags cocaine crack drugs
Can this be improved? Contact editor@spunout.ie if you have any suggestions for this article.
Jump to related articles
Was this article helpful?