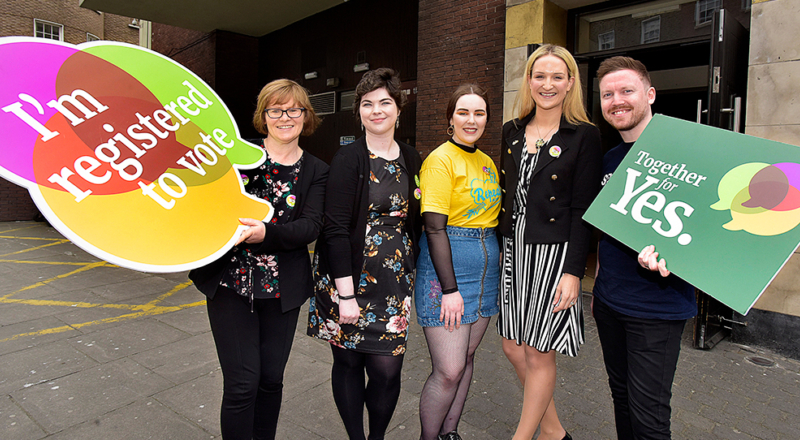 SpunOut.ie call for a Yes vote in final hours before 'once in a generation' vote

At the beginning of May, SpunOut.ie announced their support for a Yes vote in the referendum on the 8th Amendment with the launch of the Youth for Yes campaign.

With voting to begin at 7am tomorrow, the youth information website are encouraging everyone to vote Yes when they enter the polling booth in this 'once in a generation' vote.

Why SpunOut.ie are calling for a Yes vote

With around 12 hours to the opening of the polls, SpunOut.ie have outlined some of the reasons why they support a Yes vote in the upcoming referendum:

Abortion is already happening in Ireland

This is not a vote on abortion, because abortion is already happening in Ireland.

We know that nine people travel from Ireland to the UK every day to access abortion services, and three people take abortion pills each day, alone and unsupervised. Since 1980, more than 170,000 people who have needed or wanted an abortion have had to leave Ireland for the procedure.

When we vote on Friday, we will be voting on whether we want to make abortion in Ireland safe and regulated, or if we want to continue forcing people to access unregulated, unsafe abortions and travel to another country to get the care they need.

For compassionate, regulated, and safe abortion care in Ireland, we need to vote Yes.

The 8th Amendment has an even greater impact on marginalised groups

While some people who choose a termination are in a position to travel, there are many people who cannot. In some cases, this might be because they cannot afford to, they have migrant status that doesn’t allow them to travel, they have a disability that restricts their mobility, or they won’t be able to access abortion services overseas in their own language (such as Irish Sign Language (ISL) for the Deaf and hard-of-hearing community).

These extra barriers can cause delays for people seeking abortion, and many who travel will end up accessing abortion later in their pregnancy than they would have chosen.

The 8th Amendment is harmful to the health of pregnant people, both mentally and physically.

If a person has a medical condition or experiences a medical emergency while pregnant, their health and life could be at risk, because doctors are not able to act to provide proper care for their patient under the 8th Amendment.

People with a diagnosis of Fatal Foetal Anomaly experience even more pain and hurt by being forced to travel if they choose a termination. Victims of rape experience more distress if they become pregnant but cannot access the care they need at home.

The only way to provide compassionate medical care for people in these situations is by voting Yes.

Nothing will change without a Yes vote

Some people believe that abortion should be available in certain circumstances, like rape or fatal foetal anomaly, but don’t agree with abortion in other situations.

If there are some situations in which you agree with abortion and want to see the law changed, then you must vote Yes.

It is not possible to bring any change in the law without removing the 8th Amendment from the constitution.

SpunOut.ie are asking you to vote Yes for compassionate care in Ireland

If Ireland votes Yes to repealing the 8th Amendment, the proposed new laws would allow people to access safe, legal and early abortions in their own country under the care of their own doctor.

Read more about SpunOut.ie’s position on the 8th Amendment at SpunOut.ie/repeal

SpunOut.ie announce their support for a Yes vote in referendum
How the 8th Amendment impacts Deaf and hard-of-hearing people in Ireland
8th Amendment is a harm to health, Amnesty International says