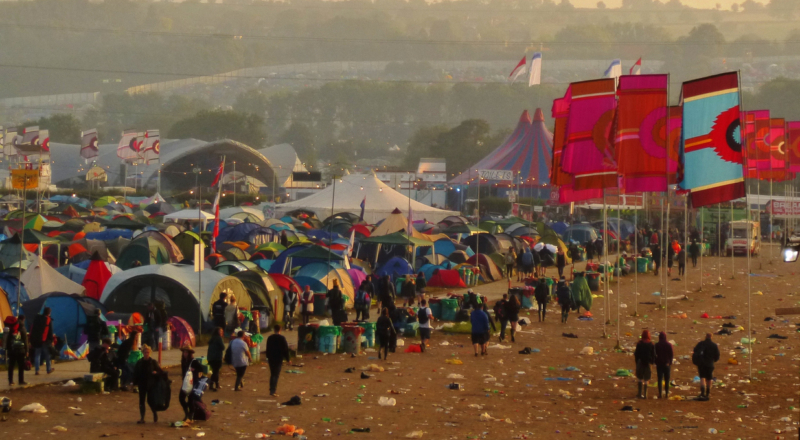 What I've learned about young people and climate action

Edi joined the Climate Action Team at Electric Picnic this year, coming away with some important lessons

Written by Edidiong Bassey and posted in opinion

It filled with me a bit of excitement and nervousness when it was confirmed that I would be a climate change volunteer at Electric Picnic (EP). Music festivals, a common fixture in the social calendar of many young people, was never something that particularly appealed to me. Before EP, I hadn’t been to an overnight music festival before, preferring concerts instead. This was something that bewildered several people but not something that really bothered me.

One reason, among many for my lack of interest in festivals is the sheer waste – of tents, drinks, food, sleeping bags etc. This waste, which littered the fields after a festival, is so damaging to public health, never mind the environment. Even in my less climate conscious days, I had never understood why there would be so much waste and why people wouldn’t take home their tents and sleeping bags. To me it just seemed like a normal thing to do and one didn’t need to be a climate change enthusiast to do that.

Anyway, going to the festival, I had high hopes, ever since the school climate strikes and Greta Thunberg’s activism, I have been led to believe that young people are more environmentally conscious than ever. I read how music festivals, particularly in the UK have been cleaning up their act and becoming more sustainable. I wasn’t sure what to expect but I was convinced that it would be for the better.

Try to limit what you bring to the festival

I think the first thing I did was not to carry too much luggage; I didn’t know how small my luggage was at the time until I got to the waiting line to take the coach. I was shocked at the sheer amount of stuff that was being taken in – cases of beer cans, a lot of sleeping materials, suitcases and the like. As the luggage outnumbered people by more than 2 to 1, there was actually a low number of people in the bus. So much so, that when they made a public announcement that anyone who didn’t have heavy luggage could come in, I was the only one who got in, in a queue that still had over thirty people. I think this is the first problem - if you carry too much, you are more likely to want to leave stuff there.

At the festival I was a member of the Climate Action Team. Unlike normal festival volunteers or workers, our job was to make sure that festival goers have an understanding of the Climate Emergency and leave the festival in the most environmentally sustainable way as possible. I was fortunate that I was allocated to a campsite called “Greta.” As you could probably guess, most of us in that campsite where environmentally aware.

Talking to festival goers, it was clear that a significant majority were adequately informed about the climate emergency. But in my opinion, I felt like many people had a more detached view of it than I was comfortable with. It felt like they believed something should be done but were not as enthusiastic in making environmental pledges. Many often required a nudge to make pledges and while some did, it showed that while they may-be informed, they are not yet ready to make the changes required. This is a telling sign.

The generational divide was also obvious. Older people had very little interest in discussing climate change and some were actively hostile. I have always thought that older people were not as committed but the difference really showed at the festival. Young people, even when not environmentally active, did at least try to give us the time of day. I am not sure what’s the answer to that, but I guess it comes down to us young people to educate our friends and older relatives and get them on board the climate change train.

Cleaning up at the end of the festival

By far the biggest surprise was at the end of the festival. From the feedback from other members of the team, it seemed that most people would be cleaning up after themselves, but even simply taking their tents proved a difficult task for many people. There was a significant increase in the tents being taken home and rubbish being disposed properly, particularly in the campsites that we had a significant presence in, one of which had a 100% clear out. But for the other campsites, it was far short of my expectations. Going around on the final day, I gave out trash bags to a significant number of people, many of which smiled and accepted it gracefully, only for me to turn around to see it dumped on the ground. It really hurt seeing that, young people may be more informed, but it seems that that doesn’t always translate into behaviour change. If the demographic that is most affected and most aware isn’t ready for the change and I include myself in that, then we are in trouble.

This experience has unfortunately made me less, not more optimistic. It is an important lesson for us all that people’s habits and behaviours are difficult to change. Just because we know something is good for us or good for the planet, does not always mean we do it. Finding a way to inform people and to support them to change their behaviour will be key to tackling climate change.

Share this article -
Published Sep­tem­ber 23rd, 2019
Tags opinion festival climate change climate emergency
Can this be improved? Contact editor@spunout.ie if you have any suggestions for this article.