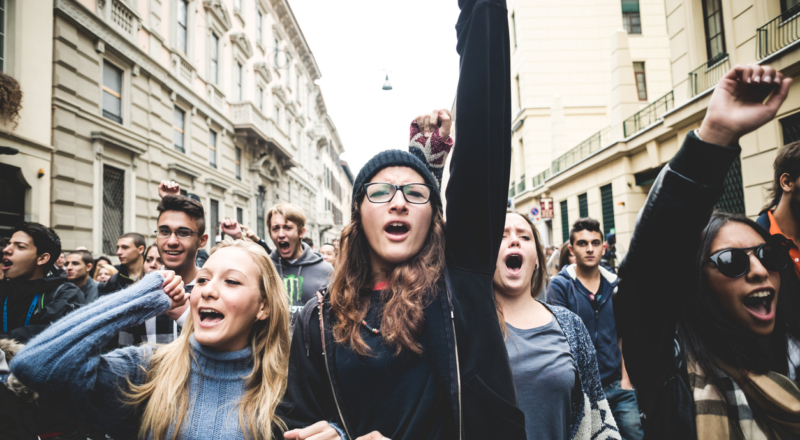 Why we need immediate action on climate change

Written by Laura Halpenny and posted in opinion

On Friday 20 October, I joined millions of young people all over the world in expressing our outrage at the lack of climate action being taken by our leaders.

The strike I spoke at was spearheaded by "Friday's for Future Dundalk,' a group of young people from different schools in the town who are inspired by the Swedish teenage activist Greta Thunberg. As I always do at strikes, I felt this indescribable feeling of unity and strength, surrounded by people who feel as I do, every chant renewing my passion for the cause. The chant of 'What do we want? Climate action! When do we want it? Now!' was deafening. The sea of beautiful signs was inspiring.

With representatives from other locals schools, I organised for my year to attend the climate strike held at Market Square Dundalk. I am pleased to say we had a huge turnout with representation from many different local schools and colleges attending. There were also local councillors and politicians present, as well as members of the general public. I was empowered to deliver a speech to the crowd of students, describing why I’m experiencing eco-anxiety, the grim nature of the problems we are facing as a result of the climate crisis, and urging political leaders to start taking immediate, radical actions.

Meanwhile the Taoiseach was opening a new runway at Knock Airport. The irony is quite clear. A huge amount of effort went into organising this protest and it was a great success. This protest happened on the same day as thousands of other protests all over the world. It is estimated that 4 million people across took to the streets to protest for climate action.

I, along with the other students of Dundalk will persist in the fight for climate action until a future is secured for us on this planet. To keep up to date with our progress and future strikes, follow our Instagram, @fridaysforfuturedundalk.

Here is the speech I delivered to the crowd of climate protesters:

Hello, my name is Laura Halpenny and I am a sixth year student from Ardee Community School. First of all, I’d like to thank everyone for coming here today. More than any amount of shares and posts about climate change awareness, striking is the most powerful way to get our voices heard. Big thank you to everyone from Fridays for Future Dundalk for having us, it’s the people like you that are at the heart of this movement.

Why are we striking

So why are we here? Why do we strike? What can a group of students do to fight against the force of climate change? Shouldn’t we be in school, studying for our futures?

To this I say we strike to be heard. To disrupt the system. To force policymakers and the people in power to see past corporate greed and open their eyes to the reality of the ecological crisis that we are experiencing. We strike because we can. We strike for the indigineous people of the Amazon, the lungs of our plant and centre of biodiversity, whose forests are still burning to clear room for beef agriculture. We strike for refugees displaced by inhospitable temperatures as a result of climate change. We as we already witnessing the effects of climate change, with more frequent extreme weather events and changing seasonal patterns being seen around the world. We strike for those who have lost their homes due to increasingly intense storms, droughts and floods.

We strike for that polar bear cartoons on our packaged cereal boxes as their real life habitats are destroyed by melting ice caps. Changes in climate and weather are forcing species to migrate to new areas. There is plenty of evidence already of species’ ranges shifting as a result of changing conditions. Those that cannot adapt or escape their newly inhospitable area are likely to die off. When I speak of species, I speak of humans too. We strike to survive. We have burned so much carbon into the atmosphere that the CO2 levels are higher than they have been for the past 3 million years. In the last decade, our carbon emission levels are the highest in history, and we have not yet experienced their full impact. If we were to stop emitting carbon dioxide tomorrow, we are still on track for much higher temperatures for decades. And we are certainly not stopping our emissions by tomorrow. This blanket of carbon in the atmosphere has triggered, and will trigger, further runaway warming systems that are not under our control.

Each day, the extra energy that is trapped on our planet is equivalent to 400,000 Hiroshima bombs. There are no known technologies that can be deployed at a global scale to reverse the warming, and many climate scientists feel that the window for doing so is already closed, that we have passed the tipping point and the heat is on runaway no matter what we do. We are now in the midst of the sixth mass extinction with about 150 plant and animal species going extinct per day.

Some of the consequences we face are mass die-offs due to widespread drought, flooding, fires, forest mortality, diseases and dying ocean life — all of which we now see in preview. If we were to make it through these threats, we would still be facing mass starvation. We are now about one degree celsius above and climbing fast. As I became aware of these facts and many hundreds like them, I also marvelled at how unaware most people are to the coming catastrophes. There has never been a greater news story than that of humans facing extinction, and yet extinction is rarely mentioned on the evening news, social media, or on the front pages of newspapers. The public responds by remaining fascinated with sporting events, reality tv, the latest political scandals and celebrity gossip. We love to be distracted from ourselves, and we have so many ways of doing that in our time. We pay big money for the privilege and we run about chasing objects and experiences in its service.

To me we seem to be designed to put aside or entirely ignore future threats and instead focus only on immediate concerns and personal desires. This is understandable since for most of human history there was nothing we could do about future possibilities or events happening far from where we lived. However, this is happening here and now and we have a brief window of opportunity.

Our government must do more

Last year the Intergovernmental Panel on Climate Change (IPCC) reported that emissions of carbon dioxide would have to be cut by 45 percent by 2030 in a bid to keep the rise in global temperatures below 1.5°C, that we had 12 years. But now more and more scientists are claiming the tipping point for addressing climate change could happen in the next 18 months. Our government must take this seriously and take radical action to limit our impact on the environment. We strike to save ourselves, to save our future children, to save our planet and home.

Thank you for listening

Share this article -
Published Sep­tem­ber 26th, 2019
Tags opinion climate change climate emergency climate action and environment fridaysforfuture
Can this be improved? Contact editor@spunout.ie if you have any suggestions for this article.