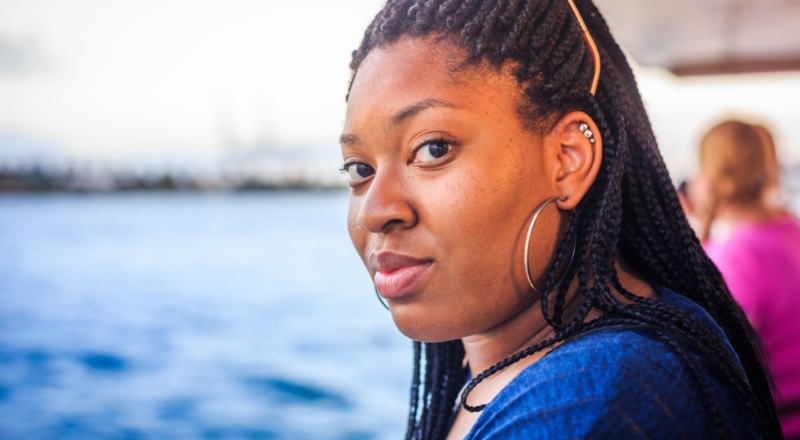 Why being black in Ireland is hard

Olive talks about the racism her and her family have experienced, and why life does not need to be so hard

Written by Olive Jagha and posted in opinion

As a black person, the death and unfair treatment of another black person is the beginning of an emotional roller coaster, one that you can not begin to know its length or intensity. On the 25th of May, the video of the murder of George Floyd by a police officer in Minneapolis, caught me off guard and left me hollow and overwhelmed by sadness, anger, helplessness and pain. This is the hardest and most gut wrenching thing that I have learnt about being black. From the murder of a fellow black person, I think you have no other choice but to focus on it, and then be resilient and keep moving. The only thing that won’t let us move on is our question - when will people treat us equally?

Growing up as a black girl in Ireland

Growing up in Ireland, one of the first things I learnt is that I was born different from what many people believe is normal and good. I can’t remember when I came to realise this but I knew this before I knew how to spell. Growing up my family wasn’t really accepted where we lived. Our neighbour disliked us in a way that we could never understand. He would put oil on our steps in the middle of the night so that the next morning we would fall down the stairs. In school my sisters and I were mocked and laughed at. Once my sisters were in the line for lunch and were sneered at because four black people were lined up in a row.

I have been told that Ireland is for the Irish even though this is the only home I have ever known. My features, that many black people have, was the reason I have been made fun of. I have been followed around shops for no reason. My sister has been told she appeared dangerous. She was fourteen. My brother has been refused to be played with because the colour of his skin “looks like poo.” Many people have questioned my parent’s intelligence all because they are black. All while this happened we had no other choice but to remain calm so as not to fit the stereotype that black people are loud, aggressive and uncultured.

What others need to know

Being black has rooted anxiety in me as I regularly question am I safe, will I be accepted, will I be heard, will I be seen as worthy. People who aren’t black, especially people who are white, need to acknowledge and understand that they have privilege. Privilege doesn’t suggest that your life has been easy but that the colour of your skin is not the reason that it has been difficult. What I think black people want people who aren’t black to know is that we can’t mend this social construct, built by years of oppression, on our own. We need others to recognise that just because you have not experienced racism does not mean that it doesn’t exist or it doesn’t concern you. We need others to stand up for us and show their alliance, by not making it about themselves but about wanting to change the way that black people face life as it is. No one should be afraid to be outside, inside or anywhere only because of the colour of their skin.

Black people have contributed to the building of the industries that so many people profit from and enjoy. Our music, our style and our films are loved across the world but we ourselves are constantly unappreciated. What we own is copied and taken as someone else’s culture and idea. Africa was raided and emptied of its resources to build the major world powers but still, even though many of us are tired, we stand. Being black is powerful because we thrive even when we are expected not to. Being black is beautiful because our beauty comes from the strength that we have to continue to sing our song even when there seems to be no reason left. Being black has taught me that resilience is key, though sometimes the fight just doesn’t seem worth the reward.

What does all of this mean?

We all have so much love to give and receive. Everyone, regardless of skin colour. It is everyone’s job to create a new norm where everyone is accepted for who they are, especially black people. Everyone can help by not allowing small racist comments to be said. Having a conversation with family and friends about racism and learning about how to support black lives is a way of helping racism in Ireland to be overcome. Never be a bystander while someone is treated unfairly. Change only comes when we use our voices and stand altogether to find peace. To find equality. Talk to your black friends and ask them how you can help. Many black people feel like we are running in circles but not this time. This time, we are running to a new reality.

Share this article -
Published June 9th, 2020
Last updated Sep­tem­ber 18th, 2020
Can this be improved? Contact editor@spunout.ie if you have any suggestions for this article.