Illan shares his thoughts on how an LGBTI+ inclusive sex education programme could benefit everyone.

The entire sum of my sexual education in fourteen years of schooling amounted to probably about five hours. Ten minutes of that was devoted to noting that we may experience same-sex attraction and that it may go away, but if not that’s okay. Not precisely “holistic” as the buzzword-loving school programmes say. I think I was rather lucky getting those ten minutes, to be honest, many of my other peers did not receive any such acknowledgement.

Growing up gay, one thing that I was constantly aware of was STIs; specifically, HIV and AIDS. Often viewed as a “gay” disease, it was made out to be a massive risk that all gay men faced, that it was incurable and basically a death sentence. It instilled a lot of fear in a young, gay me – fears of intimacy and trust. Of course, getting all my information from the internet on questionable websites was hardly helping. But where else could I go? School wasn’t there for me.

Puberty already feels like such an isolating period, this only compounded that.  It was only as I got older and became more exposed to the world that I realised there are treatments available, and even a preventative drug called PrEP. I do not ever recall being informed in school about the treatments available for any STI, only that condoms prevent them (which is also only a half-truth!).

Having only been taught the bare minimum in class (that “gay is okay”), I had only the media to show me what a functioning same-sex relationship between men was. These were always portrayed as either two things: hyper-bitchy or hyper-sexualised. Sometimes both. It severely affected my ideas of healthy same-sex relationships.

Inclusive LGBTI+ sex education should be aimed at destigmatising same-sex relationships beyond the “gay is okay” mantra. It is for the safety of young LGBTI+ people who are already in the midst of a vulnerable period in their lives. Showcasing healthy non-heterosexual relationships, including guidance on consent and communication, will equip these young people with boundaries and the confidence to enforce them.

Most importantly, sexual health is mental health. LGBTI+ people are at a higher risk of taking their own lives. While a number of reasons factor into this, stigma is a huge part, and especially stigma around STIs. This is not just an LGBTI+ issue either. People are deemed “dirty” and shamed, or excluded for it. To destigmatise these issues would take the shame out. If people feel as if they are in control of their sexual health even after being diagnosed with an STI, it is less of a mental burden to carry.

There is also another benefit to having an LGBTI+ inclusive sex education curriculum: it demystifies these experiences to non-LGBTI+ students. It allows room for classmates to empathise with each other and discourages ignorance, which hopefully denies prejudice a chance to develop. LGBTI+ inclusive sex education is important because we live in a world where LGBTI+ people exist and have every right to be included in receiving safe education, crucial for their healthy development.

This piece is part of ‘Under the Sheets‘, the National Action Panel’s Voices campaign to raise awareness of the importance of unbiased fact-based inclusive sex education for all young people. Access more information and supports for sexual health.

The need for education in ending violence against women

Craig outlines his thoughts on what we can do to combat violence against women through education.

While the new junior cycle RSE programme is everything Aoife wishes she had learned, she is sad for those who have missed out. 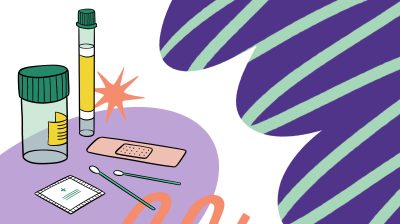 While Lisa has found that getting an STI test is easier than expected, she feels more education is needed to reduce stigma.