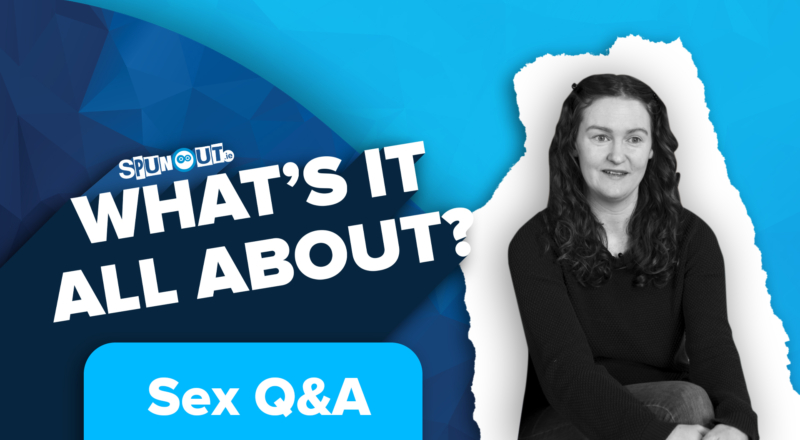 SpunOut.ie asked for your questions about sex that you might have been too embarrassed to ask anywhere else.

You responded, and we had Anna Keogh, sex educator, give her advice on the issues that you wanted to know about.

Here are the answers to your questions:

Is it normal for neither party to finish during sex?

The majority of time that we engage in sexual activity, someone will have an orgasm. That's usually a male, if there's a male involved. What I would say is enjoy the activity itself - if orgasm isn't happening, that's okay. You've still had a good time.

Sometimes if we focus on orgasm, then we kind of lose our presence in the present moment. It's better to communicate with your partner and say ‘that felt really nice’, even if an orgasm is not going to happen.

I'm a 21 year old female and I don't know how to come during sex. Myself and my boyfriend have tried and tried but it just doesn't work.

What I would say to this person is really don't worry about it. The majority of women cannot come from penis in vagina intercourse. The way that our pleasure organs are based around the vagina just means that they're not really being stimulated enough in that type of movement and in that type penetration.

Try different things, don't be afraid to get more hands on. You can use your hands, their hands and maybe a bit of lube might help as well - that might stimulate other areas. They can start to use toys as well, there might be some smaller toys that you can use during intercourse that could also help with orgasm.

But like I said, sometimes it's just not possible through intercourse. But there's plenty of other activities that we can do that can get us there.

Me and my boyfriend were having oral and I took forever to come and I had to help myself along. Is that unusual? I feel like he might be feeling bad about it and maybe thinks he was no good, which isn't true at all.

The worry about taking too long to come is something that's really common amongst women and people with vaginas. It's a really, really common worry.

There is not a time limit, and if you're enjoying the moment itself and not focusing on the end goal, then how much time you're taking won't be at the forefront of your mind - you'll just be enjoying what you're doing.

When it comes to reassurance for the partner, let them know ‘I had a good time, that felt really good’, give positive reinforcement for what they are doing.

How do you know if you have come?

I think if you're asking that question, you probably haven't. I suppose the feeling of coming or having an orgasm or ejaculating is like a really intense feeling. Having an orgasm or coming is different for every single person, so it's something that maybe you need to discover on your own before with a partner or partners. That's a way for you to discover what you like or what you don't like as well.

I love touching/kissing a guys facial hair and I also have wet dreams about guys. Does that make me gay? Also, I'm really struggling with my sexuality. What do I do?

Will you get pregnant without using the pill and only using a condom?

Using the pill and a condom at the same time is a really good way of looking after yourself. So what we would have there is contraception in the pill and protection in condoms. If you don't use the pill and you just use the condom, it is still contraception because it stops the sperm from getting inside and meeting the egg. Condoms, when used correctly, are 98 percent effective, so they're actually pretty good for STIs and pregnancy.

Take it slow, start off small and you can work your way up.

I’m a 24 year old male. My medicine seems to have taken my sex drive away completely and I have lost interest in sex due to the side effects. Is this normal for a male my age? What can I do to help these side effects?

We do hear this a lot, actually, that medication can lower someone's sex drive or like this person says, just take it away completely. Unfortunately, that is a side effect of some medications. We hear this a lot, people start to panic. They might feel much happier if the medication is working, but they have a loss of interest in any sexual activity.

What I would say is go back to the doctor that prescribed you the medication if you can, and speak to them about this. They might be able to change the medication to a slightly different one that doesn't have that side effect. They might be able to prescribe something else to counteract it. But the actual loss of interest could be affecting your mental health, so it's something that you would need to speak to your doctor or your GP about.

And again, I think in that question, the word ‘normal’ - is this normal for a male my age? - please don't focus on what's normal. Everybody is completely different. Nothing is normal. So don't worry about what everyone else is doing, get yourself some help and whatever makes you happy, your doctor should be able to help you with that.