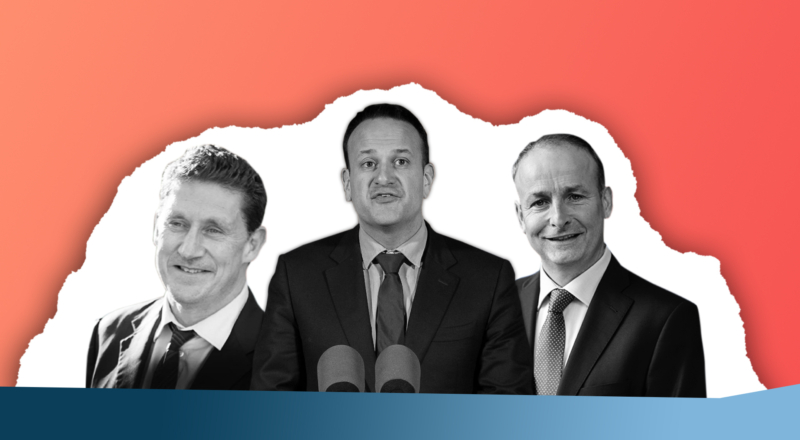 Earlier this year, Ireland had a historic election that saw Sinn Féin win the popular vote for the first time ever. However, a party needs 80 TDs (Teachta Dála, or members of parliament) or more to form a majority Government, and Sinn Féin only ran 42 candidates, with 37 of these winning seats. Often, political parties do not have enough elected candidates to form a Government on their own, which means they need to join forces with another party or with independent TDs to make up the numbers - this is called a coalition. Sinn Féin have been unable to form a coalition government with other parties.

As a result, Fianna Fáil (which has 37 seats) and Fine Gael (which has 35 seats) entered into talks with one another to see if they could find a way to form a coalition government. Together, they only had 72 seats, so they still needed another party to support them. This is when the Green Party, with 12 seats, began negotiating with the other two parties. Fianna Fáil and Fine Gael have also met with a number of rural Independent TDs, but those TDs have not had any involvement with this current Programme for Government. Read our explainer on the difference between Fine Gael and Fianna Fáil.

The result of these negotiations is a document called ‘Programme for Government - Our Shared Future’. In order for these three parties to form a Government together, members of all three parties must vote in favour of the programme.

What is a Programme for Government?

A Programme for Government (PfG) is a document that lays out all of the things the Government hopes to achieve over its time in power. It includes policies for areas such as healthcare, the economy, transport, climate change, housing, immigration, education, and more.

The Programme for Government also outlines how the Government will function, since there will be three different parties sharing power.

Who will be the Taoiseach if the PfG passes?

Who will be the Tánaiste if the PfG passes?

The Tánaiste (deputy head of Government) will also swap between parties. While Fianna Fáil hold the office of the Taoiseach, the leader of Fine Gael will be the Tánaiste, and vice versa. During this coalition Government, the Tánaiste will have more influence than usual based on this agreement.

What will it mean for the Green Party leader?

The leader of the Green Party (currently Eamon Ryan) will not have the opportunity to be Taoiseach or Tánaiste because their party is the smallest. Instead, they will have an office inside the Department of the Taoiseach where they can coordinate with other members of the Government.

Whether or not they go into government, the Green Party is scheduled to have a leadership contest within the next few months. At the moment, the candidates are the current leader, Eamon Ryan, and his deputy, Catherine Martin. Depending on how Green members vote, either politician may lead the party in government.

You can hear what Eamon Ryan told SpunOut.ie about the Green Party’s priorities before the last General Election here.

When is the vote on the Programme for Government?

Members of Fine Gael, Fianna Fáil, and the Green Party are currently voting on whether or not they approve of the programme. Deadline for voting is midday on Thursday. The results of the vote are expected on Friday.

How will the parties vote?

Each party has a different system for voting on the agreement.

Fianna Fáil are using a ‘one member, one vote’ system, which means every party member’s vote carries the same weight. If a majority of Fianna Fáil members vote in favour, then the party will approve the Programme for Government.

The Green Party members will also vote based on the ‘one member, one vote’ system. However in order for the Greens to accept the Programme for Government, more than two-thirds of the membership must vote ‘Yes’.

Fine Gael has a more complicated system for these votes.

A delegate is someone who votes on behalf of other people. Each electoral area (known as a constituency) has a local Fine Gael party organisation. Each of these select 10 delegates to represent the members in this area, who will vote on their behalf.

What happens if the PfG doesn’t pass?

If any of the three parties vote no to the Programme for Government, it won’t be possible to form a Government under this current deal. Since this Programme comes after months of negotiating between the parties, it is unlikely that the same three parties will be able to come up with another agreement.

This means that Ireland could end up with another General Election this year. It is also possible that a new draft Programme for Government could be negotiated by a different combination of parties, though it is unlikely a new government could be formed without at least two of the three biggest parties (Sinn Féin, Fianna Fáil and Fine Gael). A new General Election cannot be called without the permission of the President, Michael D. Higgins, who may decide that the parties need to go back to the negotiating table before they can go back to the electorate.

Until then, there is a chance that a very short term minority government could be formed to carry out certain functions, such as forming the new Seanad (upper house of Parliament). The Seanad is needed to enact legislation (make laws), but the Seanad cannot sit without a new Taoiseach to nominate senators. Until the Seanad sits, new laws can’t be made. However, we don’t know for certain if this will happen and agreeing a temporary Taoiseach could be almost as difficult as negotiating a new Programme for Government.

Learn more about the Seanad.

Share this article -
Published June 24th, 2020
Last updated Sep­tem­ber 23rd, 2020
Can this be improved? Contact editor@spunout.ie if you have any suggestions for this article.
Jump to related articles
Was this article helpful?

What the Programme for Government means for young people
Fine Gael vs Fianna Fáil: what's the difference?
Irish political parties: The Green Party, Social Democrats, and Solidarity-People Before Profit