Saving Ireland’s Biodiversity: What is biodiversity loss and what can we do?

Ali outlines how important it is that we all step up and fight to save Ireland’s rich biodiversity.

Biodiversity means the variety of different species living in an area. It refers to all types of life, from the largest animals and plants to the smallest fungi and bacteria. Life exists in a complex dynamic system, where a huge number of species interact in any given area.

For example, picture two simple forests. Forest A is made up entirely of Sitka spruce trees, with grey squirrels living in the branches. Forest B is half the size of forest A. But in it are oak, ash and hazel trees. Foxes walk across the earth and red squirrels dart overhead. So, in forest A, we counted two species, Sitka spruce and grey squirrels. In forest B, we have five: three tree species, the fox and the red squirrel. Therefore, even though it’s smaller, forest B has a higher biodiversity. There is a higher variety of different species living in the area.

Biodiversity is the foundation of a healthy ecosystem, ecosystems which we are a part of. From clean air to healthy oceans, it all comes back to a healthy functioning ecosystem. As we look past ecosystem services and our relation to them, we can also respect the inherent value of nature. Biodiversity is important because it exists, and has existed long before us.

What is happening to biodiversity?

We are in the sixth mass extinction event. A mass extinction event is when species die out on a large scale at high speeds. (Think, for example, the loss of the dinosaurs). This is a crisis. Species are dying out before we can even classify them. It is human-driven extinction. We remove ourselves further and further from nature and watch as it dies around us. We need to step up and fight back to save biodiversity.

What is causing this biodiversity loss?

Biodiversity loss is a complex issue and there is no one cause to it. It is more likely a combination of interacting factors. A major one being the loss, degradation and fragmentation of habitats. Habitats may be destroyed completely for land-use change and developments, or fragmented such as a road being built through a forest. Pollution and climate breakdown as a result of intensive agriculture practices, transportation and the burning of fossil fuels also have major impacts. Pollution is indeed a major issue for our freshwater systems.  As our planet heats up, this disrupts natural timings in nature (called phenology) like when plants flower or insects emerge. Often these events are happening sooner,  which changes their life cycle and how they have evolved to interact with the world.

Invasive species – species which have been introduced to an area due to human actions and cause harm to the ecosystem –  are another problem, particularly in Ireland. Plants such as Japanese knotweed and rhododendron, which have been introduced to Ireland by human actions, take over and prevent growth from our native plants. Many of us know about the grey squirrel, which is a huge factor in the reduction of the native red squirrel numbers.

And of course, there’s overconsumption. From overfishing to overharvesting peatlands and forestry, we can see the damages on a local and global scale. People continue to take and take from the environment without giving it an opportunity to recover and grow.

What can we do to prevent biodiversity loss?

While we know that any substantial action needs large-scale change, that doesn’t mean there aren’t important actions we can each take from home.

If you have a garden, one of the best things you can do is leave it alone! Let the grass grow wild. Don’t cut it. Especially in summer. And more topical for Autumn, leave the leaves. Do not blow them. Do not rake them. Do not put them into plastic bin bags. Leaves falling is part of the ecosystem. They are needed for healthy soils and to support local wildlife. Leaving the leaves on the ground is also beneficial for the traditional garden, leaving fertile soils ripe for planting.

Reducing our management of natural spaces is a great way to let them revert to a healthy natural state. Speaking from experience, it is fun to see what plants and flowers pop up every year, and to see the higher variety of birds and insects coming to explore the tall grasses. Did you know that there are species of butterflies in Ireland that solely rely on finer grasses like Meadow Grass as caterpillars?

Even if you don’t have a garden, but a balcony or windowsill, leave out a tray of water, or make a mini lagoon for the summer. Many insects, like hoverflies, need water to lay eggs and to live out the early parts of their life.

Get in touch with local climate and biodiversity groups

Get in touch with your local council and TDs. Ask them what their biodiversity action plan is. Talk to your local TidyTowns committee. Many TidyTown groups have a focus on supporting nature and biodiversity and are involved in the All-Ireland Pollinator Plan.

Check for local volunteer opportunities or citizen science projects, such as garden bird surveys or the Explore Your Shore Campaign. Environmental NGOs such as the Irish Wildlife Trust and Birdwatch Ireland often run events to get involved with nature and biodiversity, and they can be as fun as they are informative.

If you are still in school, ask your teachers if the school has a biodiversity action plan and whether there are any measures it can take to help nature. This can be from direct action on the school grounds or having a talk and inviting a speaker to discuss biodiversity. Or in college, check if your SU or college has a sustainability team and ask how you can get involved.

Be aware of invasive species and what you can do. Double-check that your activities are not accidentally helping them spread. For example, if you are into water sports like kayaking or fishing, make sure to clean your boat if moving it between different bodies of water. Or if you do want to plant things, opt for a native plant instead one with the potential for invasiveness. Sometimes a little bit of research is needed!

And finally, keep talking about it! Biodiversity loss is as important as the climate crisis, but unfortunately, does not get as much attention. The Biodiversity Emergency and Climate Crisis are intrinsically linked, and actions we can take to help biodiversity will also benefit the climate. You probably know that ponds provide a habitat for insects and frogs, which in turn feed our mammals and birds. But did you know ponds can act as a carbon sink. This means they absorb carbon and store it.  They are also a natural method for flood defence, storing water during extreme weather. Extreme weather which is increasing due to climate change.

So, it is up to us to keep talking about biodiversity loss and what we must do to stop it. If looking at ecosystems and biodiversity has taught us anything, it is that even the smallest individuals and actions can play a big part.

Where can I learn more about biodiversity?

Finding my voice through volunteering with spunout

As Denise finishes up her volunteering experience with spunout, she reflects on the journey it has taken her on.

How I cope with eco-anxiety

Amy reflects on anxieties that many young people feel and how feeling empowered has helped them to cope. 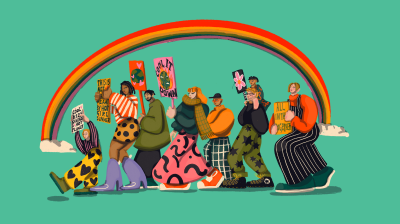 spunout's Island on Fire campaign, designed by spunout volunteers aged 16-25, is a conversation series on climate, climate justice and biodiversity.